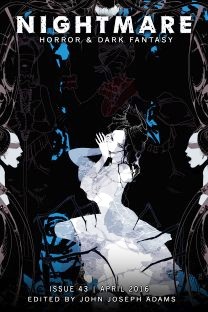 “The Girl Who Escaped From Hell” by Rahul Kanakia

Ian Whates has concocted an effective, compact little piece of 2,000 words featuring an unnamed narrator explaining to a police detective how he smells the most wonderful perfume in the world—just prior to people dying a violent death. Well crafted and thought-through, “Reaper’s Rose” is a fine example of what can be accomplished in a minimal space and in the right hands. And with a perfect last line.

Rahul Kanakia‘s “The Girl Who Escaped From Hell” is an interesting story if not wholly successful, if I read it correctly. It is told through the eyes of a father who has been awarded custody of his six year-old daughter. The daughter and her mother were involved in a traumatic near-death accident that left the daughter believing that she had been taken to Hell and then returned. So compelling was her story that she and her mother were media darlings for awhile, making the tv and other media circuits, and leading to the mother capitalizing on the Event by way of a best-selling book.

The father quits his job at a midwest cannery and moves with his daughter to California (thanks to a large monthly financial settlement from the mother, who is now well off due to book sales). Throughout her childhood and adolescence, and as time passes, her father continues trying to disabuse the daughter that she actually visited Hell, to which at some point she acquiesces though the father still has his doubts about whether she is telling the truth, or merely placating him. In one detailed scene she describes her horrible sojourn in Hell, which indeed is quite traumatic and specific, and in another a meeting she has with Satan and yet a second visit to Hell, with a warning given to her by Satan. All of this the author uses to explore the question of the existence of a Heaven or Hell, and the differences in some sins being Hell-worthy while others are not, along with touching on the concept of Original Sin itself. All of this is well done andthought-provoking (for short story purposes) and we wait to learn how the author will end this dark tale, how he will resolve the issues he has raised.

Not wishing to provide a spoiler, I will say that the focus shifts from daughter to father several times, and that the final scene is that of the father and something that happens to him that would appear to be the answer to at least one of the questions the story poses. If so, it didn’t strike me as a strong enough answer (or resolution) given what had gone before, and it is still left ambiguous as to whether the daughter actually believes she visited Hell or if she has now outgrown the notion—she having now left her father and is reunited with her mother as a teenager on a “nostalgia” publicity tour in hopes of reviving interest in her mother’s book, which sales are seriously flagging. So is the daughter pretending in front of the media for her mother’s sake, or is something deep within her compelling her to relive what she believes actually happened to her? I think the author plays fair with this ambiguity, especially since it is of a religious nature (that of belief), and so carefully trods a sensitive area. But what I don’t understand is how the father was awarded custody of his six year-old daughter (or why the mother is giving her up in the first place, for that matter), when he worked manual labor in a cannery (which job he quit to move to California and live more or less as a beach bum/surfer with his daughter), when his wife is given to us as the smart one, the writer who made it big, both as a celebrity and the substantial breadwinner. I felt like I was missing something.

All that said, “The Girl Who Escaped From Hell” was an interesting read and had its basic religio-philosophic angle paired well enough to the little girl’s vivid recounting of her visits to Hell to give the reader pause for reflection, which is a good thing for a story to do. Unfortunately, though the story paints a decent picture up close, when you stand back to view it at a distance it just doesn’t hang quite straight.