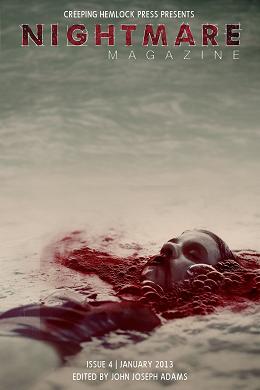 “On Murder Island” by Matt Williamson

This issue of Nightmare contains two satisfyingly creepy stories. The first is a tale of retribution from beyond the grave, while the second is a blackly humorous tale of serial killing.

Tamsyn Muir‘s “Chew” is set in Germany, immediately after Hitler’s death. The main character is a ten-year-old boy named Anton, who lives in Stuttgart. He’s given some gum by an American soldier he considers to be a friend, but later he catches the soldier raping a German woman. He’s too young to understand just what’s going on, but he knows it’s something wrong, and feels guilty when he runs away.

Several days later, the woman turns up in the morgue where his father works, dead of suicide. Anton feels guiltier than ever, and that guilt manifests as a strange obsession with chewing gum. The dead woman speaks to him, demanding he bring her some, and at first he thinks he’s imagining it. She orders him to help her take her revenge on her rapist.

This story is all the creepier because of the setting, the nightmare that was immediate post-war Germany. Anton isn’t fully aware of all its horrors, but I as the reader was. The American soldier often seems just like a normal man, which made his actions all the more disturbing to me. The lack of overt gore is effective, too, because it leaves much to the imagination.

“On Murder Island,” by Matt Williamson, is set on a very aptly-named island, where it would seem people kill one another for fun. The narrator, seventeen-year-old Toby, claims to have killed four hundred and eighty-six people. He lives with his friend Peter, a grown man dropped onto the island by the “Mainland” people. Together they kill anyone who happens to stumble on the island, until there are only the two of them left. One eventually has to go.

The narrator’s voice gives the story a dry, black humor: he says he’s seventeen, but he sounds much younger. Murder is a game to him, and he plays it like a child would.

It read to me like Toby might be simply insane, Murder Island a construct of his head. The story doesn’t indicate one way or the other, but I didn’t mind the ambiguity. Insane or not, I thought he was an engaging narrator, funny in a way he wouldn’t be aware of. 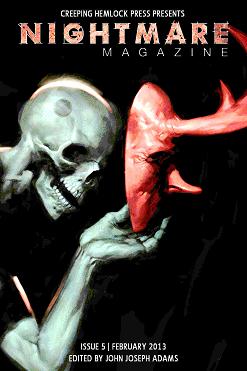 This issue of Nightmare contains two incredibly creepy stories. One I enjoyed quite a bit, but the other felt lacking to me.

In Sarah Langan‘s “Sacred Cows,” a woman name Clara struggles to deal with her bereaved father after her mother’s death. He’s begun showing signs of dementia, leaving all the work of the funeral preparations up to her.

Her father, it turns out, is not as demented as he seems. Clara realizes he sees the ghost of her mother, because she sees it, too. She has to figure out how to lay the spirit to rest, and in the process, realize a few things about her mother and about herself.

I really loved the atmosphere in this story. I could easily picture the cold greyness of Clara’s life, all the little difficulties that add up and multiply. There’s an implication that her mother was not quite what she seemed, and that Clara herself has inherited some of the supernatural difficulties her mother had to deal with all her life. Though a short story, Clara herself was a well-fleshed-out character, one I genuinely felt sorry for. The ending implied a note of hope for her.

Ted Kosmatka‘s “Cry Room” is the story of a father taking his young daughter to church, to witness his cousin’s child’s baptism. The little girl cries and refuses to sit still, so he’s directed to the ‘cry room’, a place where parents with young children can watch the service without disrupting it.

They’re soon shooed out of that one, down through a progression of rooms that are each a little shabbier and more disheartening than the last. In one, the father observes that there’s blood on the walls, that some of the children are literally demons, and that’s what made the story start to fall apart for me. Was it all some delusion within his head? A metaphor? The story didn’t make it clear to me, and it felt unfinished.