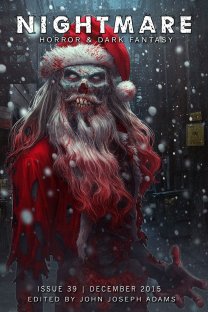 “The King of Ashland County” by Caspian Gray

The “boy” is a collector in this horror story, finding victims for the “monster” his master. Originally a victim of the monster the boy now realizes he is a kind of monster too as he entices his latest victim to “see the monster.” The monster has found the perfect tool, for who would suspect a kid walking along with another kid. The mystery is why has the boy never found the courage to break away.

I did not find the story compelling. It didn’t break new ground in horror, provide much mystery to pull me on, or have a twist in its tail to leave me thinking.

“The King of Ashland County” by Caspian Gray

This is a fantasy yarn about Cian, a selkie (human on land, seal in the sea) captured by a drug dealer in Perrysville. We meet the addicted teenagers who call the dealer Uncle Reggie; he is the only good thing they know as they all come from dysfunctional families. Cian is desperate to get his “skin” back so he can return to the sea, but Uncle Reggie has hidden it so he can take advantage of the selkie–a common theme in selkie folklore. Folklore also shows selkies never gives up on regaining possession of their skins.

An interesting story that is hard to put away as the mystery around Cian unfolds slowly. I found the writing was easy to read and engaging, but felt the story plot itself lacked the pull needed to make this a strong tale.