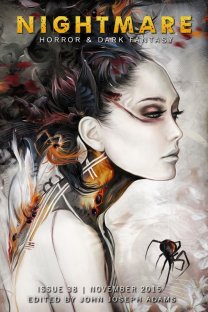 “Demon on Aisle 6” by Matthew Kessel

Bad weather in Seattle puts Ramon in a dismal frame of mind. Even worse, he keeps seeing a homeless old woman who makes him think of a terror from Mexican folklore, La Llorona. Most of the story revolves around Ramon’s flashbacks to the misery and poverty of his childhood in Mexico. Only his mother could soothe his fears on stormy nights. Every time he crosses paths with the old woman, she asks, “Have you seen my children?” She seems so alone, so abandoned, that she stirs up the weight of guilt Ramon carries over leaving his mother and sister behind.

Ms. Moreno-Garcia has a very strong writing style. I’ve read a few of her stories now and I must say I get so caught up in the story that I don’t notice the writing. The water imagery is used to great effect, the rain, the river in the folklore about La Llorona, and in Ramon’s own tears. The climax of the story left me rather frustrated because Ramon’s character arc is not complete. He does take action, but there’s no lasting change or loss. Aside from confronting his own guilt, he’s in much the same position as he was at the start of the story.

“Demon on Aisle 6” by Matthew Kessel

Lucas encounters a demon in the candy aisle of the supermarket where Lucas works. This is an old school demon, big and hideous and hungry, stuffing whole bags of candy into its fanged maw. As the story progresses, Lucas keeps speaking in his thoughts to someone very important to him who is now gone. Who that is and why that person left Lucas’ life make for a believable, tragic and very effective story. The truth behind the demon’s appearances makes a painful amount of sense, combining genres in a manner that brings layers of meaning to an already complex story.