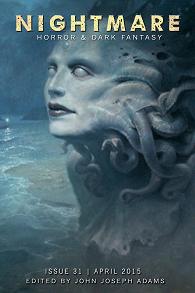 “Spring Thaw” by Charles Payseur
“The Island” by Desirina Boskovich

A gay half-Cuban young man accompanies Lucas, an expert researcher, to the Antarctic to take measurements regarding the potential movement of the Pine Island Glacier. A flyover spots something in the ice, prompting the two men to investigate. The main action of the story alternates with flashbacks about the protagonist’s childhood with his father, the trauma of losing his father shortly after coming out to him, and the abusive relationship he endures with the sadistic Jake. What lies waiting to be discovered holds great meaning for the protagonist about his past, his present, and what is left of his future.

If you look at the main action of the story, the two men get the message about the flyover, make their way through the ice and snow to the site of the discovery, and find what’s there. That’s it. The flashbacks do generate considerable sympathy for the protagonist, so I was surprised to see that by the end of the story there really isn’t much change or growth. He keeps hoping Lucas will notice him in a romantic sense, but he never gives Lucas much of a hint about his own feelings. He does manage to break away from Jake, but in Lucas all he finds is another emotionally distant man who keeps the protagonist around because Lucas needs his driving skills. The story is less nightmarish than it is sad and depressing.

A family sails from the mainland to an island where they plan to live safe from the pandemics destroying civilization. The story is told by the oldest daughter, only five when the family lands on the island they name “Treasure.” The girl’s descriptions of the outer world and the island are a mixture of factual observation and storybook references. The radio keeps the family in touch with mainstream life. Their boat is dismantled and turned into a house. A garden and domesticated sheep provide food and clothing. When a seismic event opens a rift in the island, the deep split unleashes otherworldly creatures. Daddy falls into depression while Mommy exhibits what sounds like a mix of cabin fever and PTSD. They spend less and less time together, yet the parade of new siblings continues, including Rock, Bug, Leaf, and Violet, three boys and a girl. Mommy moves on one side of the island and Daddy to the other. A family named Robinson stops by and leaves a television and a phone. These objects become the focus of the power struggle between Mommy and Daddy. The children, the eldest being teenagers now, are loyal only to each other and decide upon a plan that will settle matters once and for all.

The plotline feels very much like The Swiss Family Robinson meets Lord of the Flies. As the parents’ marriage falls apart, the traditional authority figures abandon their duties so the older children must take charge to ensure the family’s survival. The family has “gone native” beyond the point of the merely aboriginal. There’s no explanation for why the parents name their children after nonhuman mineral and vegetable objects. Those names further distance the siblings from what’s left of human civilization. When the fissure opens and all life on the island is jeopardized, it’s a microcosm of how humanity has wounded nature to the point of nature fighting back. A tree grows up out of the fissure and becomes the centerpiece of the new moral order the oldest sister and Rock have agreed upon, much like the pig’s head becomes the “Lord of the Flies” for the boys in William Golding’s novel. This is a complex story that took a lot of thinking to create. Unfortunately, the archetypal similarities to the other two literary works create a predictability that undermines the shock value of the ending.