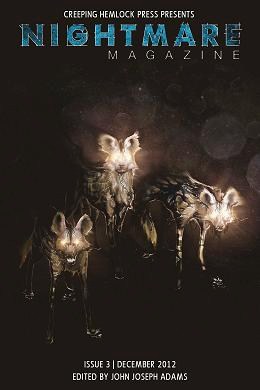 This issue of Nightmare contains two nicely disturbing stories, one of which is also satisfyingly disgusting. Both made me shiver, each in its own distinct way.

The narrator is a ‘first-timer’, one new to the game, taken on by a man who trawls the ads for the inexperienced. They play together until both become bored, and part on mostly amicable terms. The narrator is dissatisfied, however, and places another ad, so obsessed she ignores the outside world.

Her original partner contacts her, knowing she’s had no responses to her ad, and offers to ‘help’ her: if she’s truly tired of life, he can take it away. Creatively.

She turns him down, but the damage has been done to her psyche. She’s addicted to pain like a drug, and realizes it’s only a matter of time before she’ll tear herself apart.

I thought this was a wonderfully well-done slice of creepiness. It’s gory in all the right places, and I got a very good sense of the narrator’s growing mental instability. It also hints at a very jaded world, one that I could easily see producing someone as disturbed as the main character.

“Foul Weather,” by Daniel H. Wilson, posits the idea that weather holds a consciousness of its own, and that it can influence people’s violent tendencies.

The narrator is a former meteorologist, and old man made somewhat bitter by the computerization of his trade. He says that his mother once told him foul weather bred foul deeds, and he recounts the incident that made him believe her.

He tells of a trip he took on an airplane, one that flew into the heart of a massive storm. It was unlike anything he’d ever seen before, and he found himself thinking odd, violent thoughts — wondering what would happen if he killed the old lady beside him with her knitting needle. He realized there was a darkness with them, some inhuman presence drawing out those thoughts, right before the plane tore in half.

All the passengers and crew but one survived, he tells us. A flight attendant was sucked out into the atmosphere, and he felt the darkness go with her. The storm, he discovers later, formed over a piece of land in Africa that had just gone through a massacre of four thousand people. He doesn’t know if the storm influenced it, or if it influenced the storm, but he’s sure they’re connected.

I really liked this one. The premise is creepy in and of itself, but the language makes it even more effective. The description of the storm is beautiful as well as unsettling, and it gave me a brief but effective feeling of claustrophobia.