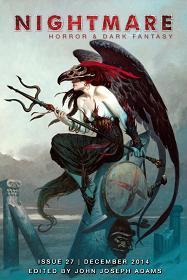 The “Bog Dog” is a dubious treasure discovered by the two young daughters of a dirt poor Irish family while they’re stealing peat from the neighbors’ cursed land. The curse itself is the subject of local legend, with the older daughter choosing her favorite variation as part of her narrative. One set of neighbors living on the cursed land made their fortune by finding the remains of a human preserved in the peat bog. Archaeologists were so delighted by this find they paid the family fifty pounds sterling. Money like that could make all the difference in the family’s survival, so the girls are willing to risk taking the dog’s preserved corpse from the cursed land. When a massive snowstorm hits, the Bog Dog proves itself useful, but at a price.

The first two thirds of the story are compelling thanks to meticulous detail and the ominous sense of impending disaster. Making the story of the curse one of several variations works well. Nobody knows exactly what happened, but everybody knows something wrong still lingers. The climax of the main narrative is confusing. This was a big disappointment given how precise the writing was up to that point. The ending feels very abrupt and tacked-on. I had to re-read it three times to figure out whether or not I’d missed something crucial. The fragmented perceptions of the older sister don’t combine into clear enough suggestions about what’s happening in her mind and what’s happening in external reality.

Andy, Joe, and Kai are three young boys who have just gotten out of school for the summer holiday. Andy can’t wait to go exploring in the woods and have adventures. Joe wants to go investigate the “pillbox,” a brick and concrete structure built during WWII to conceal British soldiers who would halt the advance of German troops in the event of invasion. That’s where the “older kids” go to do everything they’re not supposed to do. Andy discovers the entrance, but Joe is the one to rummage around the trash piled inside. He finds lighter fluid, then a book of matches. In Joe’s hands those are a bad combination. The story jumps ahead thirty years. Andy has come back to the site of his childhood. After a day of nostalgia and disappointment, Andy spots a figure he believes to be his friend Joe. The figure leads him back to the pillbox and to more than just memories of that summer day long ago.

Andy is a tepid main character. He doesn’t act, he reacts. He happens across the entrance to the pillbox by accident. The one bold move he makes is being the first one to go inside, to do so alone. Is that what makes Joe so resentful and reckless that he pours out the lighter fluid then goes looking for a match? Kai might as well not even be in the story. He’s just along for the ride and bolts at the first sign of danger. When Andy returns to the scene thirty years later, there is no context for his current existence. No parents, no job, no relationship, no kids, no pets. There’s no precise motivation for why Andy returns now. Why wait thirty years, during which he had no contact at all with Joe, his best friend? Andy develops what he thinks is a sunburn that gets progressively worse as the story accelerates toward the climax. More and more details come across as references to “The Blair Witch Project,” Slenderman, and other familiar tropes from the “found footage” genre. The ending does not satisfy. It takes one of the biggest cliches in fiction and turns it inside out, yet still arrives at the same contrived place.