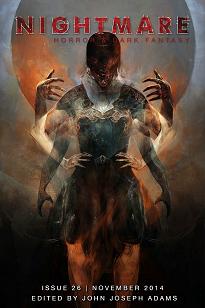 “Rules for Killing Monsters” by David Sklar
“Who is Your Executioner?” by Maria Davahna Headley

The world of Jim’s favorite MMORPG allows him to explore aspects of himself that cannot come to light in the real world where he’s confused, frustrated, and suffers at the hands of three bullies. A slip of the tongue online leads to Jim confiding in his friend Amy, another player in the same game. With her help Jim continues his explorations, bringing his newfound strengths into his everyday life. The integration isn’t completely successful. When the three bullies catch on to what Jim has really been doing with his spare time, the consequences are sudden and brutal. By this time the partial integration of selves has taken Jim far enough that he must make a full commitment to the person he really is.

If it sounds like I’m skirting around the main issue, that’s because I am. I do not want to spoil the discovery that is at the heart of this story. It could be said that Jim is an unreliable narrator in the classic sense. Part of the beauty of this story lies in the fact that the reality Jim has chosen to dwell in is the more authentic reality. This is not another story of a gamer with no life who gets caught up in the escapist gratification of the game world. This is a very real, very topical story of the imagination opening pathways into accessing a deeper, truer level of being. Jim does not gain this new state of being without paying a considerable price. The title comes from the redefinition of his being and the perception gap it reveals.

“Who is Your Executioner?” by Maria Davahna Headley

Trevor and Zellie are childhood friends who share the fascination and terror of knowing Oona, the beautiful and enigmatic creature who never seems to be completely there. The story is told from Zellie’s viewpoint, moving backward and forward through time as she and Trevor try once again to solve the riddle of Oona, lover to each of them, heartbreaker to both, and still as addictive as nicotine. Zellie tracks the source of Oona’s otherworldly aspect back to a game they played as children. It features one of those seemingly innocent rhymes like “Ring Around the Rosie,” a rhyme that has quite a different impact once you know how and why it was composed.

It’s difficult to explain the course of this story. So much goes on, memories, hopes, fears, guesswork, and the few glimpses into what may be Oona’s true nature. Zellie knows she can’t trust her own thoughts and feelings when it comes to Oona. That makes Zellie a vulnerable, likeable protagonist. The amazing kaleidoscope of imagery that happens in almost every scene swept me up and carried me along. I found myself trying to keep up, just as Zellie tries to keep up and make some sense out of the bits and pieces of Oona that Oona is forced to reveal. The prom scene alone could give Carrie a run for her money. This is a story meant to be not just read, but experienced.