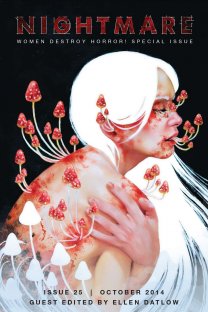 Ellen Datlow is guest editor of this issue.

“This Is Not For You” by Gemma Files

Gorgo is the nom de guerre of the protagonist, a member of an all-female group devoted to worshipping the more aggressive and bloodthirsty aspects of the Goddess. Any male who trespasses on the group’s territory gets chased into a tiger pit or cut down with weapons both ancient and modern. If there’s a shortage of trespassers, the group sends out its prettiest members to lure in the prey. Gorgo is also involved in the power struggle going on within the group. That struggle reaches its climax when a boy who isn’t just another random male gets caught in the pit.

Despite a number of powerful moments, the story itself feels like a big chunk of middle. The first third moves along at a good pace until Gorgo starts thinking about the number of women who are sociopaths and serial killers. Like most members of the group, Gorgo takes intense pleasure in her kills. She has no backstory other than brief references to three abusive foster homes. For somebody who gets primed for the hunt on the group’s special psychoactive moonshine, Gorgo thinks too much. The research that goes into this story is detailed and impressive. Unfortunately, the characters are caught between the group’s bloody purposes and the author’s need to keep adding in the ancient historical details. There are gaps in the logic of how the group functions. How often does the group hunt, and do they stick to one hunting ground or move around? It can’t be too often or somebody would start noticing the pattern of disappearances. The group is careful enough to carry off the bones to several different locations. That caution conflicts with the big bonfire central to every hunt. The authorities in charge of keeping an eye out for forest fires would be all over that with helicopters and ground support. The climax resolves only some aspects of the power struggle and leaves a number of questions unanswered.

“The Inside and the Outside” by Katherine Crighton

Told in the first person by a girl who goes without a name or much of a physical description for most of the story, this is the tale of six generic Girl Scouts out on a camping trip together. They’ve been brought together due to the large region they all live in, so they don’t know each other as friends or classmates. The troop leaders are just nameless, faceless adults referred to by their group actions. The story takes place inside the tent the girls share. Fear of bears dictates various safety measures which the protagonist knows are going to be no help at all if an angry bear attacks the camp. Weird little hints and nudges keep piling up as the story continues. Not a lot of action. Not a lot of tension. Not even what you’d expect when six girls in that age range have a sleepover. The buildup to the climax would be much more effective if all those hints and nudges added up to any clear or consistent indication of whether the protagonist is sane, unstable, or some kind of monster herself. It seems to me that the writer intends the reader to project his or her own meaning onto the final image. As a lifelong and voracious reader, I have to say the “draw your own conclusion” ending is hard to pull off. Most of the time it doesn’t work. I don’t know how the story is supposed to end. Don’t leave it up to me. If I wanted that, I’d read one of those “choose your own adventure” books.

This story is very difficult to review because every sentence brings with it some new revelation, some new piece of the puzzle. I don’t want to spoil a single moment of the excellent craftsmanship present here. In first person viewpoint, a young woman tells the story of her visit to King Minos, still alive here in the modern world. His Labyrinth is now the main attraction of a nightclub by the same name. The club features big screen TVs that show the famous occupant of the Labyrinth, the Minotaur himself. This is the young woman’s second visit to the club. The first was a disaster, and that disaster had consequences. If you like modern retellings of old myths, you’ll love this story. Watch for its appearance on Tangent Online‘s Recommended Reading List for 2014.

“It Feels Better Biting Down” by Livia Lewellyn

Identical twin teenage sisters make the most of their genetic destiny by confusing and frightening their parents. The twins speak in a private language, call each other “Sister” to preserve individual anonymity, and play other tricks born out of the resentment arising from knowing their parents wanted only one child. Each twin possesses a vestigial sixth finger by their pinkies. When they investigate the improbable sound of a lawnmower out in their backyard, they discover what appears to be a female scarecrow. Minor vandalism in the form of pitching rocks at the scarecrow results in a very unpleasant surprise that takes all the twins’ affectations to an entirely new level.

This story is bizarre with a capital BIZ, reminiscent of Richard Matheson’s “Born of Man and Woman.” The writing is strong, full of fresh, twisted imagery. The plotline isn’t all that complex, but it doesn’t need to be. The twins like to think they’ve cornered the market on strange. The lesson they learn is one that will linger in your mind’s eye.

Written in epistolary style from the true owner of the heroine’s body to the current possessor, the story takes some concentration to follow. The sister in a pair of fraternal twins stops a home invasion next door. She’s wearing her grandmother’s necklace, a powerful family heirloom passed down only to twins. One of the invaders takes it, setting off a messy chain of events. The brother in the pair of twins is the only person who could possibly believe what has happened, and how it must be dealt with.

Pat Cadigan is one of my favorite short story writers. That’s why it pains me to say this story doesn’t work. If you can imagine “Freaky Friday” meets “Harry Potter and the (Magic Item With Powers I’m Not Going to Reveal),” you get the basic idea. It’s more black comedy than horror. The heroine has no meaningful character arc. The sudden twist at the ending struck me as out of character and highly contrived. This was a real disappointment. I’d expect better from a winner of the Hugo and the Nebula.