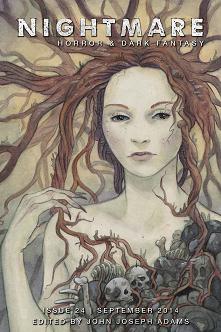 George is a Vietnamese girl getting high with her supervisor Kendra and their coworker Telly in the pet store where they work. When they hear a strange thud down in the basement, Telly as sole male is elected to investigate. Then the Boss’ wife Marlene shows up, fresh from childbirth and carrying the baby, which is not quite what anybody expected, including the Boss himself. The situation gets very weird and very messy as what should be a domestic dispute turns into a soap opera dreamed up by Escher and Bosch.

The best thing about this story is the compelling psychological realism behind George and the choices she makes. Her emptiness, desperation, and unmet needs create strong motivation. The multiracial aspect of the characters is well done. The climax did leave me with a few unanswered questions. The story doesn’t end so much as it just stops. One logic flaw if remedied could open up possibilities for a longer story or additional stories about how George deals with the consequences of the climax. The story left me wanting more, but that can be a negative as well as a positive.

“Singing with All My Skin and Bone” by Sunny Moraine

This story takes place inside the head of someone who is a cutter, who practices self-harm. I’m not sure if the person is male or female, and that’s not really important. The suffering, the need for escape, the comforting delusions and genuine truths make for beautiful, surreal writing. I was impressed by the clinical accuracy of the self-harm behaviors expressed through such a comprehensive variety of detail. There is enough blood and wounding here to satisfy those who look for that in their horror. There is also a great deal of sympathy, empathy, and sensitivity to the condition and those who suffer from it. The life of someone who needs to resort to self-harm can be a true nightmare.