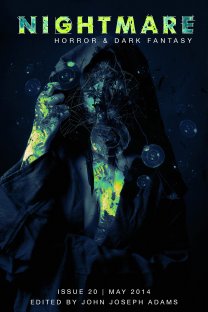 “The Temple of Celestial Pleasures” by Adam-Troy Castro

Jin is a dedicated hedonist. Rich enough to spend his life doing nothing but pursuing every kind of pleasure imaginable, he has become jaded, bored, and restless. The Temple of Celestial Pleasures is a legend whispered among the world’s top pleasure seekers. Jin is on his way to find it. En route he abandons his last concubine in a manner quite considerate by his own standards yet totally self-centered and cruel. On the way to the Temple Jin reviews his hedonistic history, a record of exploitation and satiation. When he finally reaches the Temple, he finds himself no longer master of his personal universe. He can accept the terms offered to him by Rhaji, the silver-eyed alien who represents the founders of the Temple, or he can leave. This is where the nightmarish aspects of the story begin.

If Scheherazade had added science fiction to her repertoire, it might well have come out something like this story. Mr. Castro is a writer of great talent. His style, his imagery, his utterly believable characterization of the corrupt, decadent, arrogant and clueless Jin make for a rich reading experience. The story arc struck me as an unusual version of the punishment plot. I find it hard to comment on the ending because while Jin thinks every bizarre aspect of his time at the Temple is just a means to the end he seeks, the story itself is more about the journey than the destination.

“This is How I Die” by Damien Angelica Walters

A nameless young woman seeks out a nameless male artist with the intention of having him remake her, piece by piece and organ by organ. The process begins with sketches and conversation as the artist gets to know her and gathers material for his design. The procession of surgeries is suggested rather than shown, preserving the gentle introspective tone of the story. The contrast between the external reality of amputations, replacements, extreme modifications with the internal narrative of the young woman is effective. The meaty elements aren’t the point. It’s the transformation of the person, the personality, that’s a greater priority. I confess some disappointment over the one concrete view of the young woman’s backstory. Dysfunctional home life, trying to survive on the street, the horrors of prostitution. This is too common and ordinary, too everyday for the strange world inside the artist’s cabin. It threw me out of the story. I did like the choice the young woman makes at what serves as the climax of the story.