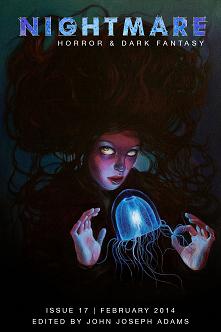 Instead of a human being coming to consciousness in strange surroundings, unable to recall how he got there or what he was doing at the time, we have Clutch. Clutch is a monster. Clutch is the freak your mother warned you about when she told you to be home before dark. Clutch wanders through the darkness, scraping together fragments of memory that involve victims and screaming and blood. That’s as it should be. He just can’t remember who he is or why he’s doing what he does. The warmth and light of a diner call to him. He enters, only to find others like him gathered for a very specific purpose. If you like a good monster story, read “The Totals.” Adam-Troy Castro has taken a very prosaic situation and twisted it into something both hilarious and horrifying, especially if you’ve spent any time in retail as a cold caller. The revelation of Clutch’s true nature and the answers to his questions about his own identity lend a whole new level of horror to the story. After reading this, I will never walk into a diner without feeling a frisson of dread and wondering about the strangers around me.

Tamsin has left her job, her friends, and her life behind to follow her husband as he pursues a career opportunity. The new house is next to a graveyard. Tamsin sees a ghost there, not at night but in the bright light of afternoon. When Tamsin explores the graveyard, she discovers the headstones all indicate the women buried there were sisters of the bereaved. It is “a garden of dead girls.” Tamsin’s awareness of the ghost she sees leads to a growing understanding of the other occupants of the graveyard. Her thoughts about their lives and deaths are intermingled with scenes between her and her husband that show him as the self-involved inconsiderate liar he is. When Tamsin once again finds proof of his wandering eye, the affinity she feels with the ghostly sisters takes on a macabre and liberating turn. A gripping story, told quietly but with surges of intensity.

I am compelled to ask a question. Both stories in Nightmare #16 were weak and disappointing. In this issue both stories are strong and merit multiple reads. Who is driving the bus over at Nightmare? Are people on staff taking turns?