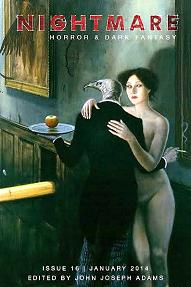 “Ghostreaper, or Life After Revenge” by Tim Pratt
“The Mad Butcher of Plainfield’s Chariot of Death” by Adam Howe

Tim Pratt is a good writer. The second half of “Ghostreaper, or Life After Revenge” proves that. Carson comes up with a clever strategy to get him out of the mind-boggling corner in which he finds himself. Unfortunately, one has to plow through the first half to get there. The story opens with Carson in his garage about to commit suicide by inhaling his car’s exhaust. The recent death of his boyfriend in a traffic accident has left Carson without a reason for living. His efforts are interrupted by Elsie, a wise-cracking redhead who’s carrying Ghostreaper, a spear with properties much like Elric of Melniboné’s Stormbringer. Elsie coaxes Carson into giving life another try for the purpose of using Ghostreaper to wreak vengeance on the driver who killed his boyfriend. That’s when the fine print kicks in and Carson finds out exactly what happens when he uses Ghostreaper. Of course Elsie doesn’t tell him those details until it’s too late. Who and what Elsie really is and why she’s driven to force mortals into using Ghostreaper is never made clear. More B-movie humor and horror go on before Carson figures out the strategy that makes the second half far more entertaining. I’d really like to know why the first half of the story couldn’t have been brought up to the standard of the second half. As it is, the story is too long, the pace drags, and I really didn’t feel much sympathy for Carson even when he does take charge.

Right now on Netflix you can find at least three movies about Ed Gein, the serial killer with a mother fixation who inspired Hitchcock’s Psycho. There are two or more movies that fake being original by leaving out the exact names and locations, but they’re still just transparent imitations of the more successful versions of Ed Gein’s gory, twisted crimes. With all that in mind, I have to give Adam Howe credit for hitting on a detail of Ed Gein’s life that has not yet been thoroughly exploited. “The Mad Butcher of Plainfield’s Chariot of Death” is Ed Gein’s broken down old wreck of a car repurposed as a carnival sideshow by Bonaparte “Bunny” Gibbons. The small legacy his mother leaves him enables Bunny to buy the car, cobble together some low grade special effects, and present the vehicle as being haunted by the ghosts of the corpses Ed Gein dug up and desecrated. Too much of the story is spent on Bunny’s resentments regarding his failed ambitions. There are a few creepy moments as Bunny’s special effects take on a life of their own. While the climax is nightmarish, it’s not all that surprising or scary.