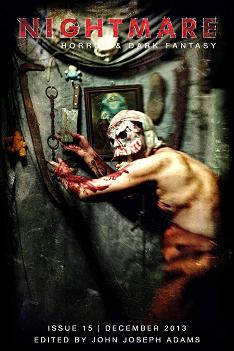 “A Home in the Dark” by David J. Schow

“57 Reasons for the Slate Quarry Suicides” by Sam J. Miller

“A Home in the Dark” by David J. Schow

Reading this story was a lot like listening to one of my neighbors talk about what it’s like to live in earthquake country. This is a fairly long story, and the first half of it is taken up with the nameless main character’s ramblings about earthquakes, the drawbacks of living near the Hollywood sign, and the anger and frustration he feels over his mounting debt crisis. The first real conflict of the story comes when the main character spots one of the minions of his debt collectors prowling around his house with a camera. When the main character confronts the prowler, the prowler trips on the curb and takes a tumble down into the debris piled up against the canyon wall. The main character rigs a safety line and makes his way down through an amazing variety of junk, overgrowth, and other cast-offs hazards. At this point in the story I was doing the mental equivalent of looking at my watch, tired of waiting for something to happen. The main character finds the prowler’s cell phone and a glass bottle of 3-in-1 oil dating back to 1910 that later turns out to be the home of a disgruntled hobo spider. Then comes the sudden, tacked-on climax of the story. The main character’s reaction is tepid at best. Nothing has really changed in him or in his world.

“57 Reasons for the Slate Suicides” by Sam Miller

The story elements of “57 Reasons” read like a very good checklist of what editors in the SF/F world want to see today. There’s the gay male main character whose BFF in high school is a half-Cherokee, half-East Indian girl. Together they concoct a plan for vengeance against the bullies on the swim team. The dumb jocks are not as dumb as they might seem, using the main character’s not-so-secret lust for one of the team against him to throw off the timing of The Plan. That buys the bullies a temporary advantage in that they get to beat up the half-breed best friend. Before they can do her any further harm, the main character arrives to unleash the key element of the plan. He has a secret weapon: psychic power. (If this is starting to sound a lot like Stephen King’s “Carrie,” the resemblance is deliberate.) The swim team doesn’t surrender without a fight. The main character gains the upper hand and tries to pursue what’s left of The Plan, but it has already cost him far too much. The title of the story comes from the numbering of each paragraph of the story. Each paragraph does contain a reason, a link in the chain of circumstance that leads to the final scene. Well-written, steeped in unmet yearnings and thwarted rage, this is a story with several levels and much food for thought.