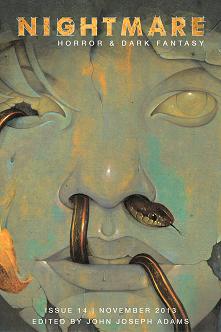 “Waiting for the Light” by Alison Littlewood
“The Beasts of the Earth, The Madness of Men” by Brooke Bolander

“Waiting for the Light” by Alison Littlewood

Finn drifts from job to job. He’s working at a burger booth, just one more food counter amid a cluster of services along the carriageway. His boss Marty asks Finn to start checking the enclosed bridge that connects the parking lot to the service area. This is no big deal to Finn, just one more task, until one night as he’s driving away he sees a woman standing on the bridge under its motion sensor-activated lights. From there Finn asks himself all the usual questions about whether or not this woman is really there. There’s a considerable amount of story before Finn gets to this point. Leon, the fry cook, is the first person to talk to Finn about the woman on the bridge, and his comments amount to nothing more than a warning to just leave well enough alone. There is no local legend, Finn makes no significant contact with the woman, and the ending is just as tepid and inconclusive. For a ghost story with some strong potential, there is no payoff for the reader.

“The Beasts of the Earth, The Madness of Men” by Brooke Bolander

Capt. Perth is a female zombie sailing a shabby raft as she chases an equally undead whale. Most of the story is Capt. Perth’s memories of her lost ship, her lost love, and the monomania strong enough to keep her alive regardless of her steady decay. There’s plenty of good seafaring detail. The immediacy of Capt. Perth’s drive as well as her physical condition are effective. I understand the point of the ending, but by then I’d been hoping for some kind of dramatic resolution to the suffering of both Capt. Perth and the whale. Most of all, I wanted to know why they’re doomed to this apparently endless chase.