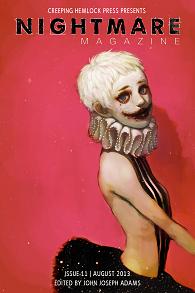 “All My Princes Are Gone” is Jennifer Giesbrecht‘s first published short story. It’s an ambitious piece of work, giving the reader Lilith’s first person viewpoint on what might have really happened during her marriage to Adam. Sumerian mythology plays a key role in the female characterizations, while the male are primarily Biblical. The main action centers around the Lilith’s daughters Ishtar and Ereškigal. They’re a ferocious pair to draw to, but they don’t really move the story forward. The story is laid out in a rather complicated format on the page. If that’s meant to add depth and meaning to the thin storyline, it doesn’t work. The ending would be more effective if the exact tone or implication was clear. I don’t know whether to pity Lilith’s daughters or live in fear of their return.

“How Far to Englishman’s Bay” by Matthew Cheney

This story took me back to my days writing my horror review column “The Penny Dreadful Reader.” Unfortunately, it did not do so for pleasant reasons. Max hits fifty with nothing to show for it but a used bookstore and a cat named Carmilla. He decides to hit the road. When Max alerts his closest and apparently only friend Jeffrey to this decision, Jeffrey has a meltdown with tragic results. Despite knowing Jeffrey for thirty-five years, Max doesn’t react to this tragedy with any real emotion. Even if I had felt any sympathy for Max, this would have ruined it. As the story goes on and on, it comes within a whisker of black comedy as Max tries repeatedly to part company with Carmilla. A waitress at a roadside cafe takes the cat off his hands, gives Max directions to where he thinks he’s heading, and throws in an ominous reference as a bonus. Once Carmilla exits the narrative, Max enters a world influenced by both Lovecraft and King. The actual plot doesn’t get moving until about halfway through the story. The story elements don’t really work together to build the necessary eeriness or suspense. All the reader is left with is the predictable ending with its buckets of blood and gore.