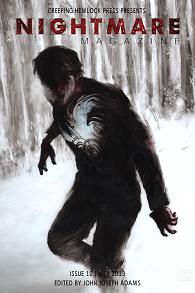 “The Krakatoans” by Maria Dahvana Headley
“And Yet, Her Eyes” by Brit Mandelo
“They Called Him Monster” by Anaea Lay

Maria Dahvana Headley‘s “The Krakatoans” originally appeared in the 2013 science fiction anthology The Lowest Heaven, edited by Anne C. Perry and Jared Sharin. You’ve got to pay very close attention to figure out all the necessary details about the protagonist. I can’t tell you much without breaking the “no spoilers” rule, not even the character’s name, because that’s also important in terms of timing and revelation.

The offspring of an astronomer is grieving over the departure of the current stepmother, who is the astronomer’s third wife. The depth and precise nature of this grief is a pivotal element in the protagonist’s motivation. There’s a lot of backstory about failure of the astronomer’s other marriages. The protagonist’s only other social contact is Mr. Loury, a disgraced astronomer with bizarre ideas about using the observatory’s telescope to look not up at the stars but down into the center of the earth. How much of Mr. Loury’s ideas are based in fact? How much of what the protagonist experiences arises from a lonely, neglected child’s needy imagination? I will say that volcanoes are involved. Given the crux of the protagonist’s distress, I think a lot more could have been done with the folklore surrounding Pele. The vivid action sequence at what passes for the climax has some interesting surreal qualities. Unfortunately, as with some movies, the special effects are the high point of the story. The protagonist has no clear goal. There’s no visible character development or change. I even read up on the history of the real Krakatoa just to make sure I wasn’t missing any allegorical content. This is a science fiction story that just misses being slipstream as well. It is not a horror story.

“And Yet, Her Eyes” by Brit Mandelo

The story opens with Sasha, a Marine who was on tour in Afghanistan, coming home from a prolonged stay in the hospital and in rehab. Waiting for her is Liz, her partner, who is ready and willing to help Sasha cope with her scars, disabled arm, and the horrors of PTSD. Sasha does not tell Liz that Sasha has brought back more from Afghanistan than just physical trauma and psychological scars. I kept waiting to find out if Sasha possesses this strange new phenomenon or if it possesses her. The key flashback of the story explains how Sasha ends up in possession of whatever this mystery element really is. Again, I kept waiting for some hint about its purpose, its origin, and/or its long term dangers. There’s plenty of potential for adding a whole new layer of horror to the authentic details of Sasha’s suffering. Thematically, the bottom line seems to be “Once a Marine, always a Marine.” Sasha doesn’t know what this thing is either, but she’s ready to fight to preserve what’s left of who she really is. While that’s admirable, there are still too many loose ends and unanswered questions. Even though the story has its problems, I will applaud Brit Mandelo for a heart-rending and compassionate portrayal of a soldier who has lived through a nightmare on behalf of her country. By the end of the story I was so invested in Sasha’s well-being that I really wanted the answers to my questions so I would know whether or not Sasha would be all right.

“They Called Him Monster” by Anaea Lay

This is the real deal, in the finest tradition of Tanith Lee and Sheridan Le Fanu. Told from the point of view of a sprite (element unspecified), this is the story of the bastard son of a priest born in the heyday of building cathedrals. Society rejects him, so he rejects his father’s world and turns to the dark side. Some fast and dirty conjuring brings the sprite to him, and he holds her captive. One can’t help but feel sympathy for the sprite. Her bonds cause her constant agony. The conjurer is a bastard in every sense, feeding off the sprite’s nature to further his career and prolong his life. What’s really fascinating is the way the sprite’s internal narrative evolves as the conjurer’s life experiences educate and shape his imagination, which in turn imposes form on the sprite. The sprite is not human and does not take on human ideas or values, preserving her priorities and basic nature regardless of what the conjurer does. I would be completely delighted with this story if it weren’t for the ending. Weak, obvious, predictable, a bitter disappointment after all the artistry that preceded it. Still, I have to say Anaea Lay is a talent to watch.