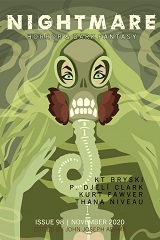 “Introduction to the Horror Story, Day 1” by Kurt Fawver

Schoolyard bullies and classroom predators—that’s what’s on the menu in this 98th issue of Nightmare Magazine.

Emmy is a girl with no friends and having little to no understanding or support at home. Brutally bullied by the kids at school for several reasons, not the least of which is her sexual orientation, she visits the park daily to feed her “sin” to the monstrous tiger hiding in the underbrush at the park. She claws it out of her insides, pouring it onto the ground where the tiger hungrily laps it up. As the pressure at school ramps up, Emmy has no choice but to keep feeding the tiger or find another way to deal with the rage building within.

The thing that struck me right off the bat with Bryski’s story is the language style and imagery. It goes a long way towards communicating the sense of powerlessness, alienation, and frustration that Emmy feels as a result of her situation. Emmy herself is a great character, one to which a lot of people can relate on a variety of levels. This is a strong story overall, and the ending doesn’t disappoint when you really take the time to stop and think about what’s about to happen outside the confines of the story.

“Introduction to the Horror Story, Day 1” by Kurt Fawver

Imagine this: it’s the first day of the semester on campus. You and others fill the classroom under the watchful gaze of the instructor meant to teach this seemingly innocuous course on writing horror stories. The lecture opens with a simple enough question—what is horror? As the discussion continues, the discourse becomes increasingly alarming, and you start to realize that this class may be far more “hands-on” when it comes to learning the true nature of horror than you’d ever want it to be.

Written in the first-person from a university professor’s perspective as he lectures his latest crop of students, Fawver’s story is an interesting exercise in metafiction. It adds tension in layers, becoming increasingly unsettling with each new talking point until it finally dawns on the reader that the professor addressing them virtually directly. I may not agree completely with the conclusions it draws about horror, but it’s still a very good read.