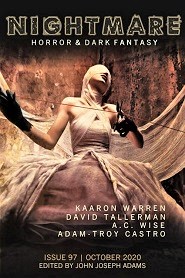 “Not Us” by David Tallerman

“The Monkey Trap” by Adam-Troy Castro

“The Secret of Flight” by A.C. West (reprint, not reviewed)

In keeping with the spirit of Halloween, the editor at Nightmare has selected a handful of creepy tales to grace this month’s issue. Along with some excellent reprints from Kaaron Warren and A.C. Wise, readers will enjoy the two brand new originals on offer, as well.

“Not Us” by David Tallerman

A woman listens to her husband chatter on about his day. She feels nothing. Even though he wants her to react, she can’t remember what the proper response would be. Later that night as they engage in intimacy, she mechanically goes through the motions, wishing they would change him as they’ve changed her. With each passing day, the desire for her complete union with them, for the complete annihilation of her individuality, grows stronger. The only question is how much longer before she and everyone else has been absorbed entirely into this alien collective?

Tallerman’s story is a spin on Jack Finney’s 1955 novel The Body Snatchers, which was first made into a film in 1956. That said, the narrative serves a dual purpose. On the surface, this first-person present-tense tale is about an alien takeover. Beneath the SF trappings, however, lies the symbolic death of a marriage. It’s not overtly exciting or action-packed; instead, it’s relatively uneventful and slow-paced. That said, it’s an entertaining read that provides an interesting and somewhat unsettling peek into what it might be like for the alien invaders.

“The Monkey Trap” by Adam-Troy Castro

In the market for a very rare book by an obscure Victorian author, Amber visits a rare book dealer recommended by one of her professors. The book dealer is beyond ancient, and his collection of books surpasses anything she could have imagined. As he’s packaging up her purchase, she asks him how he could have possibly found the book she wanted among the tens of thousands of others filling every available space in his home, considering that she couldn’t identify any form of cataloging system in use. With a rakish grin, he tells her that he organizes books according to the worst sin the author committed in life, no matter how small or obscure, and in this way foils any potential robbery attempts by rivals seeking his most valuable tomes. He then tells Amber the story by which he categorized the author she sought.

Like the previous tale, Castro’s piece is neither frightening nor particularly eventful. It is, however, disturbing. The author does a great job setting up a tone and atmosphere that is just right for the ending twist. In all honesty, I’ve generally liked Castro’s stories in the past, and this one is no exception. It’s definitely worth a read!