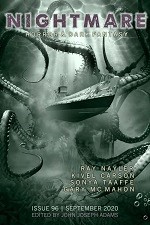 “Outside of Omaha” by Ray Nayler

“Tea with the Earl of Twilight” by Sonya Taaffe

There are two first publication short stories in the 96th issue of Nightmare.

“Outside of Omaha” by Ray Nayler

An Omaha farmer orders a catalog bride in this short fantasy. What he gets is a quiet woman from eastern Europe with a blunt response to the neighboring families.

The bride wants to be alone, treating their farmhouse as a sanctuary. And because of his lawless past, that’s fine by the husband. He isn’t even upset when he discovers her discarded skin one day. He just waits for her to return from her wanderings.

The author created an easy to read tale, but the plot itself lacked much substance and the speculative elements were slight.

“Tea with the Earl of Twilight” by Sonya Taaffe

In this short fantasy, Sid spots a ghost-like shadow leaning over the railings above an abandoned canal in Boston. Soon the apparition appears again, and she wonders what the story behind this spectral shadow could be.

When she finds a painting with the same image, Sid knows she’s on the right track. Further research reveals the painting’s deceased artist had a younger brother murdered back in his native Yorkshire. Can Sid find a way to release this spirit from it’s forlorn post at the edge of a bygone era’s canal?

This was a Dickensly-slow story that went nowhere. And did it with imaginative prose.