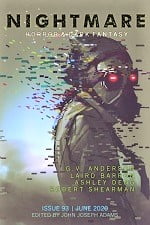 There are two first publication short stories in the 93rd issue of Nightmare.

Dorothy is researching for a collection of folklore tales, in this short fantasy horror story set in England between the wars. When she hears that the last person to hold the Osser is in Exeter, she feels compelled to travel from Bristol to investigate the story.

The Osser is a wooden bull’s skull placed on bad people before the townsfolk dunked them. A headless corpse is supposed to haunt the skull. But that’s just a folktale; isn’t it?

The author created easy to read prose, but the plot itself lacked enough punch to be a page turner.

In this short fantasy a girl starts life as a spore and she develops to appear human, though her siblings continue to grow in a basement that’s better suited for mushrooms. Once she leaves her nurturing environment to attend school, she wants the other children to like her.

However, the school kids never accept her as normal, despite her frequent efforts to appease her peers. She even offers to cook some of the mushrooms that grow on her skin. Years later, she finds university is more accepting. But even here, she struggles as her fellow students think her habits are unusual.

This was a strange tale told in the second person. The prose was alright, but the plot lacked direction.