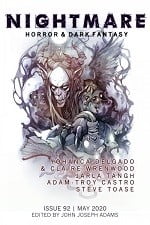 “Decorating with Luke” by Adam-Troy Castro

Relationships can be complicated things, can’t they? The two stories selected for the 92nd issue of Nightmare Magazine showcase this often-frightening aspect of human behavior, focusing in one way or another on the consequences of love soured by abuse and the many ways in which it touches the lives of those who struggle to escape it.

Amada needs a job. She’s recently left her abusive boyfriend and has got to find a way to support herself where he isn’t likely to find her. After many rejected applications, she finally lands work as a maid for a Miami hotel. During her orientation, her new supervisor mentions that she can go into any room except the Blue Room—it is entirely off-limits no matter what. It’s not long before she finds out the real reason why.

“The Blue Room” is an alright story—not terrible but not overly interesting, either. While it’s clear that there’s something not quite right about the hotel, the narrative fails to ever really shift into the truly creepy. It just endlessly languishes in “vaguely unsettling” territory. In terms of plot, the threat from the hotel isn’t thoroughly established. Readers are given the obligatory tropes of the protagonist “being watched by unseen eyes” and the ominous off-limits room, but that’s about it.

Ultimately, I must ask what is the point of anything the hotel does? At first, it appears to be a form of jealousy but then that notion is thrown out the window as the story develops. The initial abusive relationship, which served as a decent impetus for Amada’s finding the job, later resurfaces with a semblance of importance to the events unfolding, only to then be abandoned again, becoming nothing more than a very obviously contrived, worn-out, and unimaginative means of getting Amada to violate the only “hotel taboo” she was given. Amada herself teeters between being a genuinely sympathetic character and one too stupid to be believable. To be perfectly honest, this story is somewhat worth the time it takes to read, but only if you’ve nothing better to do.

“Decorating with Luke” by Adam-Troy Castro

You’ve been called to a stranger’s home, one who was also involved with an abusive jerk named Luke, just as you were. Much like you, she’s spent a considerable amount of time fantasizing about the many ways she’d like to take her revenge. The difference being, however, that she’s found an ingenious way to make it happen.

The point-of-view that Castro has chosen certainly does a fantastic job of pulling the reader into the story. Given the subject matter, it goes a long way towards building the sense of intimacy and the unwitting bond he’s trying to create between the speaker (the narrating voice) and the one to whom she’s speaking (in this case, the reader who gets pulled into the part of one of Luke’s many victims).

It doesn’t take long to figure out how the title fits into the narrative—that becomes obvious relatively early on—but it doesn’t ruin the fun. Instead, it infuses a somewhat psychotic playfulness into the rather somber, serious subject of domestic abuse. I honestly quite enjoyed this story.