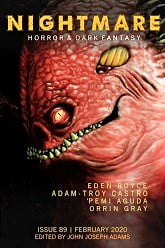 “Today’s Question of the Day in Waverly, Ohio” by Adam-Troy Castro

“Things Boys Do” by Pemi Aguda

The human mind can be an unsettling place in which to poke about. Fortunately, the two stories selected for the 89th issue of Nightmare Magazine do a wonderful job of exploring this fertile field for us, so we don’t have to.

“Today’s Question of the Day in Waverly, Ohio” by Adam-Troy Castro

Earlier today, the townsfolk of Waverly, Ohio were visited by a mysterious group of census-takers. Each person interviewed was asked what they would do if they were to find themselves suddenly tasked by God with playing the role of the Devil. All interviews were conducted at the same time and each participant had their memories wiped immediately afterward. What follows is a transcript of their answers, giving a rather enlightening glimpse into the human psyche.

Having read a few other short works by Castro, I was fairly certain going in that I’d enjoy this piece. I was not disappointed. Readers won’t find the usual story structure here, though. There’s no build of tension, no climax, no denouement, per se. Instead, it reads exactly like the thing it pretends to be: a report. That doesn’t mean it’s not fun, however, because it is. The responses of the “interviewees” run the gamut from mundane to disturbing, each one thoroughly entertaining.

“Things Boys Do” by Pemi Aguda

One evening, in three different locations, three men discover they are now fathers, each to an unusually quiet and unsettling baby boy. Although these men do not appear to know each other and are not even in the same city, their wives all somehow insist on calling their newborn boys some variation of the name John. As their fear and misfortune grow, they suspect it has to do with their infants and reach out for help via the same website. When they begin talking to one another about their experiences, they discover a terrifying truth.

Although Aguda’s narrative is a tad confusing at first as it jumps between the three anonymous men, that’s not at all a bad thing. The slight sense of disorientation this creates serves to pull the reader into the tale instead of leaving them completely bewildered, especially since it’s clear enough that we’re dealing with three separate but similar situations. It made me want to keep reading to figure out what in the world was going on. Readers won’t find this to be a terribly frightening tale. Instead, this ghost story with its hints of revenge from beyond the grave is slow, atmospheric and most definitely unsettling.