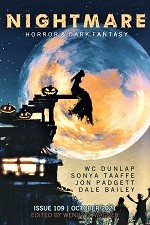 “I Summon You” by Dale Bailey

There are three first published stories in the 109th issue of Nightmare, including one flash story. Overall it was an entertaining collection.

She is one of five people hiding out in an abandoned house in this apocalyptic horror short story. A murder of crows attack anyone in the open and transforms the bodies into zombie-like automatons.

The four strangers with her don’t trust each other. Even the five-year-old girl won’t speak to anyone. And yet they must find a way to secure food and survive. And then, the old man is discovered in the morning, his throat cut, and his eyes pecked out.

Dunlap wrote this gripping story with a pace that did not let the reader put it down.

Jeffords fears flying in this horror short. He imagines all the horrors of a plane crash as he endures the three phases of a plane trip. The takeoff is the more dangerous phase, but somehow the plane makes it off the ground before the end of the runway.

Despite his worst fears, the plane successfully navigates cruising level and is now at the second most dangerous phase. Then descent begins, and all is as Jeffords expects; until it isn’t.

At first mysterious, the plot soon devolved into a catalog of passenger fears during a routine flight. The end alluded to much more than it said.

“I Summon You” by Dale Bailey

In this flash horror, Mrs. Birdwell is a medium hired to commune with the dead. And when she summons the soul of a young woman’s dead brother the spirits in the room converse among themselves and have some fun at her expense.

The author wrote this snippet from the perspective of the spirits that control the souls of the departed. It was an interesting read.