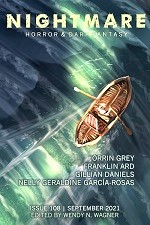 “Still Life with Vial of Blood” by Nelly Geraldine García-Rosas

There are three first published stories in the 108th issue of Nightmare. Overall it was an entertaining collection.

An overworked film editor struggles in this horror short. Having given up alcohol, they need energy drinks to get by each hour as they edit the daily tapes.

Life has trapped them in a rewinding film where they get to relive their mistakes and infidelities while the director screams that the film is over-budget. Is there a way out of these endless rewinds of a slasher movie starring the editor?

This strange story, told in the second person, held the reader’s attention until the ending, but that end just fizzled away.

Tara loves a blood-sucking frosty wraith in this short horror story. She willingly lets the ice woman suck her blood each night, though the phantom spurns Tara’s love.

Tara’s life seems to be set until she starts drinking vodka. It does something to her blood and the direction of the relationship.

This character-centric story was an interesting take on vampires and the relationship between victim and spook.

“Still Life with Vial of Blood” by Nelly Geraldine García-Rosas

In this very short horror story, the author describes three works of art by Juan Cavendra. Each piece evokes a sense of disaster, be it fire or a skull. One of the more disturbing aspects of his art is his disappearance after the last work that shows multiple copies of his dismembered body.

This story snippet evoked a sense of dread but otherwise had little to say.