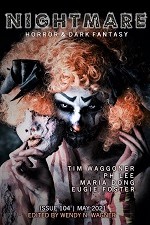 “Taking Control of Your Life in Five Easy Steps” by P.H. Lee

“The Cabbit” by Maria Dong

The stories in this month’s issue of Nightmare are centered around themes with which I believe everyone can commiserate. We’ve all made bad choices, aligned ourselves with the wrong people, and ended up in situations we wish we’d have avoided. That’s the unifying thread through each of these, and they are well worth the pain.

The husband of one of your wife’s friends died two months ago. You now find yourself staying with this friend, trying to help out as much as you can. But something isn’t right. Sure, things are going to seem off after a death, especially when the deceased was so young, but this is different. And the memorial video of the dead man that the friend keeps playing around the clock is starting to get to you—enough that you start to think you see the man moving on his own in the static images.

Written in the second person present tense, Waggoner’s story does a good job of placing you directly into the story. The pacing is slow but, instead of being a hindrance, it actually helps to ramp up the tension and increase the overall unsettling and rather surreal atmosphere of the tale. It’s quite nightmarish up until the ending, which for me was a nice twist. I was expecting something a little more sinister, but instead it reinforces that sense of being part of a relationship in which one party treats the other as non-existent and inconsequential.

“Taking Control of Your Life in Five Easy Steps” by P.H. Lee

Do you feel like you’ve no control over your life? Well, listen up because I’ve got the solution for you. Just follow these five easy steps—that’s right, just five steps—to take back those reins on which you just can’t seem to get a grip.

This bit of flash fiction is interesting, to be sure. Lee notes that this story is inspired by all those (likely unqualified) individuals who’ve given him advice on how to deal with his mental health issues, and I quite like how he’s essentially exposing the guidance that these so-called “good Samaritans” dish out as not being at all based in any form of rational thought or genuine medical knowledge. It makes for a deeply disturbing read.

“The Cabbit” by Maria Dong

Our unnamed protagonist sits in her boyfriend’s college dorm room. He has something special to show her—a new pet in a plastic kennel. He tells her it’s called a cabbit, and it eats the parts you don’t want anymore. Fingernails, hair, that sort of thing. It doesn’t take long before our protagonist starts to wonder just what other unwanted things the cabbit might eat.

In this story, Dong has captured something with which I think most people can empathize. Nearly everyone has something about themselves or about their lives from which they’d be happy to be free. And that’s what this tale is about—coming to terms with those parts of ourselves that we don’t want, those things we wish we could change, even those relationships that don’t serve us anymore or that were toxic to begin with. Unlike the previous two, I didn’t find this piece unsettling as much as I thought of it as a melancholy statement on how the wrong relationship can decimate one’s self-worth. That said, it does end on a positive note and is well worth a read.