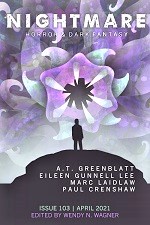 “The Family in the Adit” by A. T. Greenblatt

“When the Snowshoe Hare Turns White” by Eileen Gunnell Lee (not reviewed, non-genre)

“Step on a Crack” by Paul Crenshaw (not reviewed, non-genre)

There are four first published stories in the 103rd issue of Nightmare, two of which were not speculative and were not reviewed.

“The Family in the Adit” by A. T. Greenblatt

Wife serves a poisoned meal to the woman seeking to escape from the Mine in this short and intriguing horror story. The woman must convince Husband to give her the key to the Adit’s kitchen door, the only way out of the Mine.

At each step of the meal, the woman avoids the traps that Husband sets and even supresses her revulsion when Husband reveals his true identity. But she has one last challenge to negotiate, and this one she doesn’t see coming.

Hard to put down, this story read quickly with a captivating and intriguing plot.

A family is renting a Hawaiian beach house in this horror short. After injuring his foot surfing, the husband is housebound and amuses himself by photoshop-editing some family pictures he finds on the wall. He distorts the people in the photographs into grotesque parodies. He means it as a joke but forgets to take down his adjusted pictures when he leaves.

Over the following season, complaints come from other renters of creepy feelings and strange sightings on the beach. Rumors begin that the house sits above a Hawaiian gravesite. Has the husband’s jokes come back to haunt the visitors?

The author’s prose was easy to read, but the overall plot was predictable.