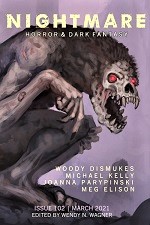 “A Cast of Liches” by Woody Dismukes

“That Which Crawls from Dark Soil” by Michael Kelly

“It Accumulates” by Joanna Parypinski

This issue of Nightmare Magazine revolves around the themes of transformation and change.

“A Cast of Liches” by Woody Dismukes

Three liches stand over a cauldron, stirring up a spell to wake a murdered young boy. When the boy’s spirit rises from the grave, they watch and wait to see how he deals with those who wronged him. Soon, it will be time for them to step in.

As mentioned in the magazine’s editorial, Dismukes’s story is one of revenge and racial injustice. In some ways, it’s a fantastic read; in others, not so much. What makes it fantastic is the voice that’s being allowed to express its pain and tell its story. What happened to the boy (and presumably the other liches during their lifetimes) that has brought him to this crossroads is horrendous. It reflects real-life tragedies that we’ve seen play out all too often across America for far too long, giving those of us who don’t have to carry around that kind of burden or fear insight into what it must be like for the victims and the community and loved ones that they leave behind.

On the other hand, purely from a storytelling standpoint, the tale itself isn’t quite as impressive as the message. To begin with, the exact purpose and intentions of the liches are never discussed. Obviously, revenge for racial injustice is a part of it, but their agenda is never really made clear. I’d liked to have known what it is they want, what they hope to accomplish, and how they plan to accomplish it. Nothing about the boy’s plight addresses these questions, the answers to which would seem to be very important considering the story’s message. The boy, after all, is just one small cog they hope to recruit as part of a larger plan, according to the little bit of information we’re given.

The scene with Mrs. McGregor and the comments about those who “do nothing” muddy the waters even further, especially when the boy acknowledges that it’s highly likely that she didn’t even know what her husband had done. This would make more sense if the boy was consumed by a howling, vengeful rage that made him act without thinking, but he’s shown to be too even-keeled and contemplative for this, too lacking in emotional force.

The other thing that sticks out to me is there’s no roundness to most of the characters. Mrs. McGregor, for example, is a flat and two-dimensional caricature known in popular culture as a “Karen.” The story is supposed to be focused on racial injustice, but there is nothing about the encounter with the salesgirl that indicates her attitude was race-based, as opposed to her simply just being an unpleasant person who’d have treated anyone in a service job the same way (as Karens are wont to do) regardless of race or ethnicity. The boy was a bit better developed but, for the most part, he and the liches fall into the same bland category as the rest of the characters. Not a single person in this story expresses any form of real or believable emotion or has any kind of genuine personality, not even Officers Sanchez or McGregor. What little is there is vague, undeveloped, and stereotypical. We’re told in the beginning that the boy’s “fury roused him from the grave” but that fury never materializes. The boy is never shown to be truly angry when he should be filled to the brim with righteous indignation over the circumstances of his death. Instead, every action and piece of dialogue is nearly devoid of feeling. All of this detracts from the tension that the story tries but fails to create. Essentially, the story has been sacrificed in favor of the social message, which greatly weakens the impact of the message itself. In the end, I finished the reading entirely unsure about what I was supposed to take away from it.

One final storytelling point that made me stumble was the treatment of “liches” as a whole. I love liches and the undead in general, no matter what form they take. Artistic license aside, a lich in fantasy and horror is a type of physical undead. The word “lich” has etymological roots in ancient Germanic and Scandinavian languages (lík), and later in Old and Middle English (līc and lich respectively), where it refers to a corpse or the physical body. First introduced into fantasy fiction in the 1920s and 1930s before becoming entrenched in the genre several decades later, liches are generally created when a necromancer wants to cheat death and live forever, often by stowing their soul or piece of themselves inside a phylactery that they safeguard at all costs (loss of the phylactery usually means death for the lich) while their body lives on via undead, or more rarely when a soul refuses to leave its physical body at death, thus rising into a physical undeath, albeit different from a zombie. They’re also rather single-minded in their focus, although that can vary. So, I am a bit confused about how the spirits in this story are considered liches. They’re clearly not physical, so it’s a bit of a stretch to call them liches, and this drew me out of the story.

All the above aside, the ending is satisfying and clever. I appreciated how the table turns on both the reader (in an emotional sense) and the police officer (in a very physical and emotional sense). Though I wish I could say why, to do so would, I think, spoil this story for readers.

“That Which Crawls from Dark Soil” by Michael Kelly

You find yourself upon a path winding through a forgotten forest. Quite alone, you are surprised to see a pale boy emerge onto the path. He invites you to play a game of hide and seek before bolting back into the cool shadows of the forest. You follow and, even after the boy disappears, you find that you’re not so alone.

For being a piece of flash fiction, Kelly’s story packs quite a punch. Because it is so short, there’s not a lot I can say about it without turning this review into a spoiler. Suffice it to say that it’s sad, heartbreaking, and well worth a read.

“It Accumulates” by Joanna Parypinski

It always starts innocently enough, doesn’t it? A sales receipt or postcard here, a new dress, a few books that you hope to read when you have time. Eventually, though, it accumulates. You run out of space. And, though you swear you saw a figure in the closet, it was really just an oddly assembled pile of old clothes and hangers…wasn’t it?

Parypinski takes hoarding to a new level in this horrific little tale. On the surface, it’s an enjoyably terrifying romp. There’s an undercurrent here, though, that speaks to modern society’s obsession with material things or even the latest in entertainment; things which often drive us to the point of distraction from what’s truly important. Often, when we finally realize what’s happened to us, when the shows and the things no longer bring us joy, we realize just how we’ve slipped but it’s too late. A very good read!