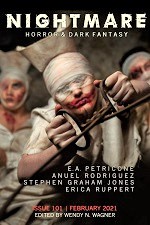 “We, the Girls Who Did Not Make It” by E.A. Petricone

“Hairy Legs and All” by Stephen Graham Jones

“And Lucy Fell” by Erica Ruppert

There are three first published stories in the 101st issue of Nightmare, including one novelette and one flash story.

“We, the Girls Who Did Not Make It” by E.A. Petricone

Monica is the fourteenth girl in this horror novelette, though she doesn’t know it. But the first thirteen girls do, and their ghosts watch as the murderers trick Monica into the basement.

Each of the first thirteen had a life to live until they visited this same basement. Each of them sensed something was wrong but didn’t pull back until it was too late. Now they get to watch and wonder what they wish for. If Monica loses, they’ll have a new friend. If she wins, history will only remember them as ‘other’ victims.

Petricone told this novelette from an unusual aspect, and though it dragged once or twice, overall, it was a pleasant and engaging read.

“Hairy Legs and All” by Stephen Graham Jones

In this very short horror story, as he remembers a wonderful summer with his new girlfriend, a tarantula lies in wait in his right shoe that he is putting on. And when his toes squeeze the spider, it exacts the one revenge it can with six perfect bites of his big toe.

Soon he is seeking escape from the pain as he tries to get the shoe back off. He wishes for anything, even a reset button. But, as many people would agree, he should be careful about his wishes.

The author told the story through a single sentence with an ending that was hard to predict. It was an interesting read.

“And Lucy Fell” by Erica Ruppert

A clipped angel is imprisoned behind steel bars in this flash horror. She works tirelessly to escape so she can rejoin him. She can feel him as she scratches at the window shelf holding the bars, using her blood to weaken the mortar. Night after night she works, nothing can kill her or dampen her resolve to welcome him into her embrace.

The author leaves much of the situation to the reader’s imagination in this morsel of a story.