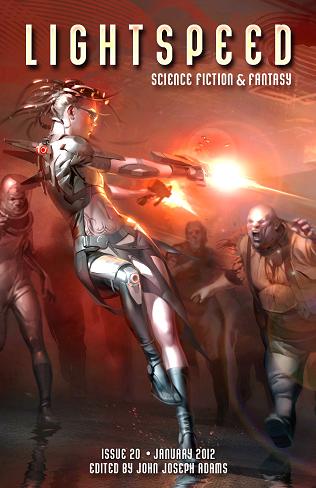 “How Many Miles to Babylon?” by Megan Arkenberg
“The Five Elements of the Heart Mind” by Ken Liu
“On the Acquisition of Phoenix Eggs (Variant)” by Marissa Lingen
“Blue Lace Agate” by Sarah Monette

As most everyone in our science-fiction-soaked culture understands, lightspeed is a shorthanded way of referring to the speed that light travels in a vacuum, about 186,282 miles per second (certain misbehaving neutrinos aside).  But it is the true aficionado of science fiction who understands that Lightspeed is something completely different.

With this issue, Lightspeed becomes something more than it was last month. Lightspeed and its sister publication, Fantasy, have merged and become. . . Lightspeed.

The question remains, however: Just how well written are those stories? But first, a bit of housekeeping. At Tangent Online we review only the new short fiction, though Lightspeed also offers four reprint short stories each month to go along with its four original pieces.

The legendary city of Babylon carries a heavy freight of meaning and allusion. That weight doesn’t get any lighter in “How Many Miles to Babylon?” by Megan Arkenberg.

The story uses a somewhat familiar set up, in that darkness has befallen the Earth, for reasons unknown and, perhaps, unknowable. With the falling of perpetual darkness comes the rising of tremendous horror. Flesh-eating Runners, Horsemen and Batmen scour the darkness, looking for the human food they need to survive.

As in the movie Pitch Black, the appalling monsters of the story are held at bay only by light. Of course, flashlights are powered by batteries. Bulbs are burning out and batteries are being used up. The light is dying.

Still, David and his unnamed wife, who serves as first-person narrator for this story, are wandering this darkened landscape, searching more by feel than plan, for the source of a radio transmission welcoming one and all to Babylon, which is supposed to have light and, thus, be safe from the monsters. There are no coordinates given, but, because the signal came on FM radio, they believe it can’t be more than thirty miles away. Wandering in the darkness, though, thirty miles might as well be thirty million.

Arkenberg, according to her biography, is a student in Wisconsin. I worry about the future. I hope she will be a fair and just master. The deal is that she’s good. Really, really good. If she’s this good at this young an age, well. . .  Like I said, I welcome a new master.

Okay, maybe a little hyperbolic, but still it does point to how I felt about the story. Sure there were flaws. There was no reason given for the darkness nor where the monsters came from beyond some vague handwaving. Not much happens in the story, but the plot really didn’t matter.

Arkenberg did a great job creating a crushingly depressing atmosphere, filled it with only two people who seem actually to be drawn from real life and inserted into appalling circumstances. I enjoyed reading about the couple, found myself rooting for them and worrying about how they would end up. That, friends, means we’ve got some good writing going on here.

In “The Five Elements of the Heart Mind” by Ken Liu we have another nice story. For a while now, scientists have been speculating that the massive bacteriological stacks living in the intestinal tract of human beings might have some effect on mood and decision-making skills. In “Five Elements,” Liu takes that speculation to an interesting place in order to play with the meaning of love and how we know if it’s real. And it all starts with an explosion.

Tyra is a junior science officer aboard the SEED corporation’s exploration ship, The Dandelion, which exploded just prior to the story’s start. Tyra and her personal AI, Artie, are the only survivors of more than two hundred sixty people on board the ship. Unfortunately for Tyra, the radio in her escape pod is capable of only sub-light communication. Linked to that, the pod has enough power for one more jump, one more blind jump.

In the first of many coincidences that will twine throughout the story, Tyra’s blind jump takes her to a human colony, founded, abandoned and forgotten for more than a thousand years. Luckily for her, the speech of these people is a form of English, which has changed through a thousand years of isolation, but is capable of being understood by Artie the AI.

Fazen is a native and finds Tyra’s crashed escape pod floating in a lake. For some reason, Tyra is sick when pulled from the pod and, using his culture’s knowledge of medicine, Fazen brings Tyra back to health. Stuck on the planet through a lack of technological necessities for building a hyper-radio, Tyra falls in love with Fazen.

Through yet another coincidence, The Dandelion‘s sister ship comes to rescue Tyra. When she is back on the ship, the planet’s bacteriological infection wiped from her system, Tyra faces the fact that some of what she felt for Fazen might be the result of being invaded by bacteria. If true, does it really matter?

I enjoyed how Liu took an interesting supposition from current science and then played it out to an interesting culture and scenario. The people of Tyra’s culture supposedly have no bacteria in their systems. Odd, considering that a lot of bacteria in our systems actually perform functions we need. Still, let it go. With no bacteria, Tyra is susceptible to the invading bacteria. How she gets sick from the bacteria on the planet when she’s still in the escape pod is another thing we’ll just let go.

Despite a few writing no-nos, for instance we learn that a character is angry and sad because the character tells us, “I’m angry and more than a little sad,” and some overly expositional dialogue in the beginning, Liu’s style is relatively clean and well-thought-out. Liu’s workman-like prose gets us where we need to go with very few flourishes, and that’s all right.

While I’d like to see a story with far fewer coincidences, this one still had a lot to say about the relationship between love and the biological imperative.

There’s a real upside to getting a chance to review stories. That upside is that sometimes you run across a great bit of narrative exuberance that you would never have found without the review copy showing up in your inbox. That happened again today with “On the Acquisition of Phoenix Eggs (Variant)” by Marissa Lingen. It makes slogging through some of the lesser stories worth it.

The story opens with a quick mention that the downfall of the Soviet Union has opened up a much larger market in exquisite collectibles: Phoenix eggs. Among the cognoscenti, phoenix eggs are collected for their beauty and their magic, but only the eggs. Louisa Pickering is a wealthy collector who knows her Phoenix eggs as well as, if not better, than she knows her magic.

At the most recent auction of phoenix eggs from Ukraine, Louisa picks up an astonishing red phoenix egg. It’s only when returning home that she discovers, to her horror, that the egg is a variant. It is actually making noise and phoenix eggs do not make noise. Drawing on the somewhat disreputable contacts of her cousins, Louisa manages to sell the egg at a loss, only to find out she was the victim of an elaborate con.

Throughout the story, Louisa makes it clear that it is only the egg that matters. Caring for the actual phoenix itself is something she considers to be fit only for those lesser than herself. She finds, though, that sometimes the unknown can hold more beauty than ever was found in the expected places.

There’s a delightful playfulness in evidence here. For instance, this description of the narrator and her fellow collectors, who might have once been known as witches: “Modern times allow collectors to focus on their collections without having to waste attention on angry mobs, who with a certain rough enlightenment viewed us as no more interesting than collectors of Red Army jackets or propaganda posters.” There’s a lot of great background and world-building going on in that sentence, but it’s all presented to the reader in a playful bit of nonsense that, at the same time, also reveals quite a lot about our narrator. The story moves along quickly and seamlessly, never sagging and never stinting, making it, quite simply, very well paced.

Louisa’s competition with and dependence on her two cousins makes for some enjoyable reading, as does Louisa’s air of superiority which never once wavered, despite the rather rapid changes in her circumstances. I’m sure I wouldn’t want to hang around Louisa in real life, but I’d love to meet her again on the page some day. Lingen has created a wonderful setting peopled with cranky and delightful characters. It cries out for a return visit.

“Blue Lace Agate” by Sarah Monette is a bit of an odd duck. A character-based exploration of the boundaries of friendship dressed up in the fedora and trenchcoat of an urban-fantasy story, “Agate” suffers from several things, however.

Jamie Keller is a very large, very tattooed black man employed by the Bureau of Paranormal Investigation’s southeast hub. With only a few years on the job, he knows he’s finally found something at which he’s not only good, but at which he wants to get better. His best chance to accomplish this is to stick with his partner, Mick Sharpton.

The problem facing Keller is that no one has ever stayed with Sharpton for more than a couple of weeks, thanks to Sharpton’s abrasive personality and a scathing tongue, who likes nothing more than cutting to pieces the personalities of his partners. Sharpton stays employed because he’s got an interesting talent. Sharpton is clairvoyant, gets flashes of insight and also can read an object’s past just by touching it.

During a routine investigation, Sharpton idly picks up a ring and has an overwhelming flash that leads him and Keller to find the body of a woman, tortured and killed in an attempt to provide necromantic power. But, really, that’s not all that important.

The important bit of this story concerns the relationship between Keller and Sharpton and how, through patient goodness, Keller can wear down the sharp edges of Sharpton’s personality. Now, that might be a good basis for a book, but in a short story such as this there really isn’t enough room to draw the tale out without things looking just too pat and easy. Which they do.

My problems start with the opening of the story, which basically is an extended scene in which Keller is happy to get home and start washing potatoes. While it’s not exactly riveting reading, it was well-written. However, it begins to illuminate a consistent problem I had with Keller’s character and the story’s dependence on said character. The only way this story was able to progress was for Keller to be almost inhumanly perfect, in an emotional sense. He’s kind, patient, giving. Basically the perfect man.

It’s through the main character’s perfection that we’re able to reach the conclusion Monette probably had in mind from the beginning, as Sharpton ends up a bit nicer and learns there are some people who’ll be nice to him.

The writing itself was, basically, well done. I get the feeling Monette has plans for this set of characters in a more novel-length story. I think that’s a much better idea. This story felt like a stripped-down test drive of a novel, rather than a story in and of itself. If I’m right, I look forward to reading that story. If I’m not right, well, take this short story as a strike in the negative column.