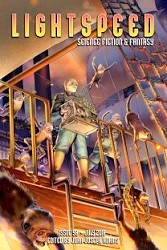 “A Song of Home, The Organ Grinds” by James Beamon

This month Lightspeed directs our attention towards four stories of varying intensity and interest. The first story is by James Beamon and is titled, “A Song Of Home, The Organ Grinds.”

I loved this story. The background is the Crimean war where the Turkish and British armies are fighting the Russians. A steampunk alternate history featuring warships, armored giants, and vicious bio-engineered monkeys, it is also the coming of age story of Ozan, our fifteen-year-old protagonist who is plucked from the streets of Constantinople and thrust into bloody battle even as he is being trained for a grisly, but important role. The war story component cannot be underestimated, for it reveals how organized warfare on this grand scale takes an incalculable toll on the human spirit.

I was severely disappointed in G.V. Anderson’s short story, “Waterbirds.” It is about two protagonists, a female called Irene, a robot companion called Celia, and their twenty-year struggle to create a life for themselves with each other on their own terms. Irene is propelled on her path by her unhappy marriage to an abusive, egotistical man. Celia, through her role as companion to Mrs. Lawson, creates an identity for herself.

G.V. Anderson aims to show the parallels between a subjugated wife and a helpless companion. That is a powerful theme. Then she marries it to a mystery story to reveal the essential need for companionship among humans. That too is a timeless concept. But the first idea would require her to write in a dramatic style with emphasis placed on emotion and imagery while the second requires grit and realism.

She tries for a magic realism element with her talk about egrets and how they mate for life but that idea never takes off. The robot, Celia, is very real. There is a corporation that has built her. There are contracts signed between the “employers” of these robots and the parent company.  Issues that would not concern us in a more romantic story in this case become serious flaws. Let me give a minor example. Mrs. Lawson is careless and does not take care of Celia’s routine maintenance. G. V. Anderson wants us to understand that as Celia disintegrates physically, she gains individuality.  But once you create a world where contracts and legal obligations exist to help big corporations protect their money-making products, then there would be an automatic paid service, some kind of life-time insurance that would periodically show up at Mrs. Lawson’s doorstep and service Celia. Lack of attention on these small details are what threw me out of the story.

I had fun reading Adam-Troy Castro’s  “Greetings, Humanity! Welcome To Your Choice Of Species!”. The premise is that mankind is going to be wiped out by a super species which has evaluated complaints about our ill-treatment of our world and its other inhabitants, and found us guilty. This super species has sent out telepathic mail to each and every human on Earth, giving homo sapiens eight sentient life forms from which to choose as its replacement host after the super species destroys homo sapiens.

The writer then gives us a brief description of each of these species. None of them is attractive. They range from earthworm-like beings to a wholly extinct species called Pylthothi Screaming Stink-Moss. The choice is a punishment. At the same time we cannot avoid choosing.

This is an intelligent piece of writing, though not structured as a story in the traditional sense. A legal battle of some sort took place in the past. We are listening to the judge reading out the sentence. That is the only action in the story; any action that will happen in the near future will be final. There are no individual protagonists and antagonists. There are no individual stories. That said, the story’s message is clear and works despite the above caveats.

I enjoyed “Wild Bill’s Last Stand” by Kyle Muntz about a fight to the finish between two long-time opponents, Wild Bill “The Buck” Williams and Wyatt Yarbury “Pink Lightning” Elton McHugh, very much.

We are stuck deep in the womb of an alternative land in the west called Bad Country which is populated by an endless stream of whores and pretty boys, where gambling dens and liquor make for a lucrative economy, and where the rule of law is maintained by outlandish creatures called Burning Men.

The Burning Men are not human, “…they stand almost nine feet tall, the faces like masks on a body outlined with fire.”

They have an awful purpose, to punish those who need punishing.

This is a simple story well told and fun to read. The ingredients are familiar and the end is known but the path taken is reasonably unexpected.

After finishing this one, some readers may ask the legitimate question: why does one need to know about Wild Bill’s final days in this world? The answer is unclear. That’s why it’s a good story and not a great one.