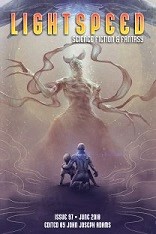 “The Quiltbag” by Ashok K. Banker

“I Sing Against the Silent Sun” by A. Merc Rustad and Ada Hoffman
“A Pilgrim’s Guide to the Lighthouse of Quvenle the Seer” by Lina Rather
“From the Root” by Emma Törzs

“I Sing Against the Silent Sun” by A. Merc Rustad and Ada Hoffman is a non-linear tale about the Seven Suns, armored gods that subjugate and conquer. Particularly nefarious is the Gray Sun, under which there is no sound, as it demands silence. An enemy that steals voices and oppresses with emptiness and despair lends the story a strong touch of thematic horror told with pulchritudinous prose. This is a story about resisting silence with art. Li Sun, the non-binary protagonist, fights this horror with poetry. While the timeline is complex the narrative momentum never slows down, and the tension always breaks at just the right moment, which enables the reader to have hope.

“The Quiltbag” by Ashok K. Banker opens with a woman named Octavia and her seemingly sentient bag. Octavia has the ability to hear the thought of fabric: she strokes her scarf and hears its musings, slaps her jeans when they get annoying, and greets uniforms worn by security officers. It’s certainly an imaginative ability that is not bereft of charming comedy. The story tends to derail into expository paragraphs, bur recovers as soon as the action is brought back to the characters and their reactions to Octavia and her bag. The bag itself turns out to be more than it seems, containing powers vast and terrifying, yet acquiesces to everything Octavia says as if she’s its schoolmarm.

“A Pilgrim’s Guide to the Lighthouse of Quvenle the Seer” by Lina Rather is about people who shed their memories in order to go on a pilgrimage to the prophetess Quvenle. She only tells them if the catastrophes they fear will come true. The ending is beautiful and cathartic, delivered with riveting writing that never once loses momentum.

“From the Root” by Emma Törzs is a story that gets its hooks into you. It is a brutal and beautiful women-centered tale about birth and death and resilience. It takes place in the eighteenth century, where a minority population of special women hides from the eager eyes of doctors and scientists. “Regenitrices,” the women are called, as they have a healing factor. The only thing that kills them? Childbirth. The story opens with a regenitrix selling her teeth to a dentist, since she can just grow them back. Her relationship with the doctor is a constant push and pull full of tension that keeps the reader guessing about the true motives of all. It’s easily the best story in this issue.

Rebecca DeVendra is a figure artist and speculative fiction writer living in Boston. Her fiction can be found at Starship Sofa and The Daily Science Fiction. She’s also a mom to three cacophonous, early-rising children. She’s probably in her pajamas, but she has an emergency collar shirt for video calls. Check out her blog.