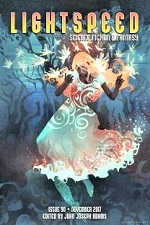 “The Faerie Tree” by Kathleen Kayembe

“A Vortal in Midtown” by Ashok K. Banker
“A Wound Like an Unplowed Field” by Max Wynn
“Cake Baby (A Kango and Sharon Adventure)” by Charlie Jane Anders

There were four original stories in this issue.

“The Faerie Tree” by Kathleen Kayembe

Marianne senses that her sister’s new husband isn’t human in this short fantasy. She can tell, because she’s a little off too, replaced by the faeries when she was a baby. But she is the only one who sees through him; her parents accept him, and her pregnant sister seems withdrawn from the whole situation.

When Marianne’s parents both die in their sleep, the day after he arrives, Marianne is convinced he killed them and took parts of their spirits. Now she calls on the faeries for help, but their price is much higher than she thought she was willing to pay.

Told in a colloquial style, the story’s tempo worked well, and the author soon pulled the reader into the intriguing mystery of Marianne.

“A Vortal in Midtown” by Ashok K. Banker

This SF short takes place in Manhattan, when a vortal appears as a tiny dot. It grows slowly until it traps an SUV. And soon after an insurance adjuster, Susan, arrives to check the damage. Susan makes the mistake of touching the vortal, and it grabs and holds onto her.

When a police officer, Jenny, goes to investigate, she touches the vortal and it imprisons her too. Now the two women must find a way to work together, racing against the clock as the police SWAT team prepares to take decisive action, believing that Susan is holding the police officer against her will.

Banker has spun an unusual story that was a true pleasure to read. Shades of the ‘Telephone Booth’ as the author ratcheted up the tension steadily.

“A Wound Like an Unplowed Field” by Max Wynn

In Wynn’s short fantasy, a witch finds a wounded man with an arrow through his leg. He lay near her cottage deep in the forbidding woods, after crawling away from a battle. He accepts her seemingly kind offer to help him if he stays with her awhile.

For months she enchants the arrow and the man learns to rely on his good leg alone. A month turns into a year, and the arrow into a branch, before the man discovers the witch’s true plan.

A curious story with a strange and unfulfilling end. The author developed the prose well, making it a pleasant read.

Kango and Sharon are an odd couple from the distant future in this SF short. After meeting at a weird destructive party, they decided to escape from bondage and make their own futures. Two years after their escape, they find themselves in debt and searching for bizarre ways to make money.

Teaming up with their assistant Jara, they scheme to steal DNA from a hippie-like colony whose babies are immune to space radiation. Things start out as planned, but soon get out of hand, leaving the three fighting for their lives.

This was a fast-paced, tongue-in-cheek space yarn with a nod to the old pulp-fiction days. At times the plot seemed more concerned with being funny than making sense and the lack of character development left the reader flat.