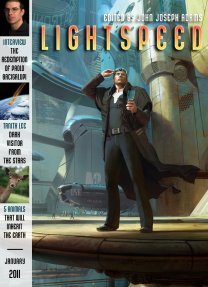 “Postings from an Amorous Tomorrow” by Corey Mariani is the diary of a ten-year-old with a surgically-induced mutation that allows him to interact and love most of the people on the planet, in a social-networking kind of way. It’s a bizarre world, where the adults have so handcuffed themselves with empathy they depend on children to murder emerging sociopaths.

Although SF requires some suspension of disbelief, when a plot entails adults behaving in simplistic, nonsensical ways, I can’t buy in.

“Cucumber Gravy” by Susan Palwick tells the tale of a hermit living in the Nevada desert, making his living selling illegal drugs. He has a strange problem. Aliens, space cucumbers, he calls them, show up on his doorstep on a regular basis. He does what he can for them, but it seems little enough. Mainly, they just present him with an ongoing quandary.

He’s an irascible curmudgeon who holds religion responsible for whatever blame the government can’t handle. Some of that fuel was heaped on the fire when his wife, now ex-wife, found ongoing solace with the local preacher. When another clergyman arrives in time to hear the cucumbers sing, our anti-hero faces a new crisis.

It’s an engaging tale that sets up some interesting problems. Unfortunately, it just fizzles out, offering neither solution nor epiphany.

In “Black Fire” by Tanith Lee, various individuals describe their experience in seeing a UFO land, as well as the man who emerged from it.  He’s a busy fellow, procreating with every woman he finds, while enraging the men in their lives.  The narrative includes the official police reports.

It has the disjointed feel of a TV news clip, one of those where they interview everyone, and it’s clear no one knows anything.  I thought it had amusing moments, but if an author is going to make me work this hard, I want a big payoff.  This didn’t have one.

“The Elephants of Poznan” by Orson Scott Card tells of a world decimated by plague, in which only a few, sterile survivors eke out a tattered existence in the Polish city of Poznan. The central square is dominated by a squat, ugly building, erected by the Communists. It’s a sad future, in which the survivors merely exist. Elephants are new custodians of the planet. They roam the countryside, but it’s an occasion worthy of note when they take to the city streets. The reason is buried in the protagonist’s own past, in the death of his wife in childbirth, and in the creation of the last baby, or maybe, the first.

I suspect a biologist would consider this on shaky ground, but it’s a well-written story. Its atmosphere mirrors the somber building, and it captures the depth and complexity of human ambivalence.

This is the first issue of Lightspeed I’ve reviewed. I found it comparable to its competition.