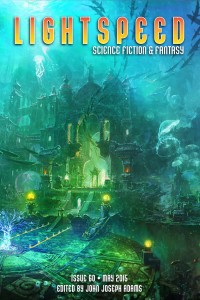 “The Myth of Rain” by Seanan McGuire
“Time Bomb Time” by C.C. Finlay
“Mouth” by Helena Bell
“The Blood of a Dragon” by Matthew Hughes

The May issue of Lightspeed presents four original stories. One continues a fantasy series with ten prior installments in Lightspeed, and three are stand-alone shorts. The longest–the fantasy series installment–is about 7,500 words, and I’ll make a case that the shortest is 1,500 words but that you’ll read it twice (at least). The length of Lightspeed’s pieces works against traditional stories with fully-developed conflicts erupting into a climax resolved through a character-illuminating choice, but each piece presents some clearly-crystallized idea worth reading those few words to enjoy.

Seanan McGuire’s “The Myth of Rain” opens as a first-person account the narrator’s hunt for a spotted owl and her nest. Successive reveals illustrate the protagonist’s experience with her near-future world descending from bad to worse. The owl’s forest is doomed to destruction: environmentalists have been given a year to mitigate environmental obliteration before the Pacific Northwest is handed to industrial profiteers who’ve arranged to have their industries’ regulation repealed – just in time, it turns out, to build the infrastructure needed to support immigrants from places like California that global warming already rendered uninhabitable. The conflict between the environmental cognoscenti and their oblivious profiteer antagonists occurs offscreen: it’s a 5,000-word piece, though it feels inspired by something that wants to be an ecological thriller. There are several sources of onscreen tension, including between ecologists who share the same hopeless fight. However, the only conflict really shown through the narrator’s eyes is her attempted capture of the nesting owl. The doing-it-for-your-own-good aspect of the struggle reminds one of William Carlos Williams’ “The Use of Force,” but “The Myth of Rain” makes a point that nature may be our victim, but–unlike the physician in Williams’ classic short–we can’t really be sure we know what’s best when we intervene. Themes give the story a much bigger feel than its tiny onscreen conflict: mere survival vs. living, acting while the rules change beneath our feet, and making decisions with incomplete information all echo experience readers likely know from their own lives. Those who don’t want to read a story from the perspective of an environmentalist who’s decided who the good guys are (and aren’t) won’t appreciate the narrator’s backstory facts; to the extent they feel like an infodump, one should feel tolerant: worldbuilding in 5,000 words isn’t as easy as it looks. The story’s greatest strength is its characters’ commitment to something that’s hopeless, in a world that scorns all they value. It’s a well-built feeling reminiscent of a crew going down with the ship, skipper lashed to the rudder-handle.

Looking for a mad scientist SF short? Set in a college dorm room, C.C. Finlay’s “Time Bomb Time” is difficult to describe without giving away its twist. A student’s thesis advisor’s criticism has driven him to make a public demonstration of his experiment in “temporal bubble theory” near a filmed protest just outside his ex-girlfriend’s room. “Time Bomb Time” contains some interesting meta-story: the characters discuss story structures that “Time Bomb Time” turns out to represent. Considerable work must’ve gone into the piece so its paragraphs would read plausibly when arranged as the structure required. Traditionally, a story is about a character who faces stakes that require a hard decision. This piece is all about the twist: the revelation of the mad scientist’s plot. It’s this twist that’s really the strength of the story. The most distinct thing about the story is its use of the story’s structure to reveal what’s happening within the story itself.

“Time Bomb Time” is not so much a 3,000-word piece about a young woman’s conflict with an up-and-coming mad scientist as it is a 1500-word piece about the effect of his crazy device a piece you’ll probably read a couple of times to feel properly, in light of what you learn reading it. The story doesn’t climax on a conflict-resolving decision so much as on the carefully-crafted aha moment in which the reader understands the misguided technology a jilted-in-love young physics student has foisted on the his unwitting onlookers in the name of (mad) science. And it’s certainly a proper mad-science gadget with a proper mad-science hapless innocent love-interest victim straight out of mad-science casting, with its gold seal still sticky from the mad-science inspectors. Or maybe it’s sticky as a byproduct of moving backward in time. Whichever. If you have any interest at all in mad-scientist villains, you have time to invest in a piece this 1500-word piece. Twice.

Like weird fiction? Helena Bell’s “Mouth” is for you. We learn hear how young Ann is ignored, misheard, or misunderstood while she grows into a young woman, all the while bearing the power to take another’s mouth (or, we later learn, other body parts). Some of the action occurs with a kind of dream-logic, consistent within the story but nonsense out of context. Beautifully weird. The story doesn’t unroll chronologically, and major events seem to occur without any revealed cause. This isn’t for everyone, I’ll grant. There’s no traditional story structure, and action doesn’t seem to depend greatly on the principles of cause and effect. There’s not an identifiable antagonist, and seldom an overt conflict. But it’s weird, and if you like that in a story you ought not miss Helena Bell’s “Mouth.”

Matthew Hughes’ “The Blood of a Dragon” is a fantasy set in the world of The Kaslo Chronicles, available online at Lightspeed. “The Blood of a Dragon” picks up the action in what feels like the middle of the story–a point that feels like it’d make more sense with background from its ten prior installments. Since “The Blood of a Dragon” hasn’t actually been published at the time of this review, readers have time to catch up on the far-future alien world on which Kaslo has learned the laws of the universe are poised to change, ending technology’s power in favor of rule by those who can work magic. Also, the sudden appearance of characters without introduction midway through the story surely makes much more sense for the overall plot with a background in the ongoing action in The Kaslo Chronicles. However, prior reading is unnecessary to follow the story or enjoy it. “The Blood of a Dragon” quickly transitions to an account of Creation, the formation of the Nine Worlds (not nine planets, but nine planes seemingly reminiscent of the Norse cosmology) by the demiurge, acting through agents–one of which, we learn, is slowly digesting the protagonist on the orders of his enemy.

Readers who like to picture stories may blink at descriptions of things Kaslo’s mind could not picture, or puzzle what it would look like for the moon to be obliterated by “a skyward burst of concentrated evil” tapped from the Seventh Plane by a machine designed to help wicked wizards juice up to get an edge on rivals. The author doesn’t supply a concrete image, but imagination inspires a fun picture. Still, this is just back-story: the action at the time of the story opens on Kaslo, trapped in a being that digests him, trying to think up an escape before his brain stops working. The fact that there’s a giant “evil capacitor” between the planes waiting for activation seems a fun piece of worldbuilding–doesn’t every archvillain need an evil capacitor to fuel his schemes?–and the combination of high stakes (he’s being digested!) and a ticking clock (he’s being digested!) should make the whole a heart-pounding piece of action. Alas, Kaslo spends time recapping things the reader has already worked out from the facts just related to him by being that’s forced to digest him and– fter he escapes–repeating information for the benefit of newly-arrived characters. There’s a Tolkienesque quality to some of the narrative–not the dialogue, that’s quick and moves the action nicely–that works against the feeling the story is unfolding quickly. This is an illusion: the story is about 7,500 words, so it’s not slow. By mirroring the voice of traditional fantasy epics, though, the narrative voice works against the energy and urgency one might otherwise feel in a great line about enslaved wizards inspired to revolt, knocking a villain into the path of hungry demons, and so forth. That said, the story is exciting: there’s terrible stakes for the protagonist and the Universe, there’s multiple simultaneous physical conflicts, there’s multiple characters working at cross-purposes–it’s a fun installment in what feels like a big story continuing to unfold. Lest readers fear it goes nowhere, this installment by itself builds the world without requiring reference to outside sources and shows the protagonist using his wits to change his position. One wants to see the protagonist made to do more, see him forced to make hard decisions, see him pressured into more than a merely-physical conflict, and find out what he does to take control of the chaos in his threatened universe. It’s a fun fantasy short and a great ad for the rest of the stories set in the same universe.