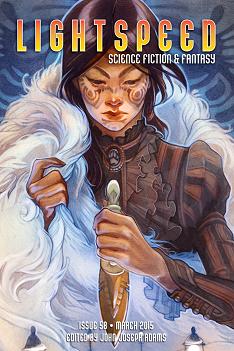 When Father Elvis arrives at a destitute city where racing hot rods on salt flats provides the major entertainment, the citizens expect rain to follow. It’s been bone dry there for years, and the people have heard that the Elvis impersonator has a way of bringing on the precipitation. However, there’s also a secretive military base where some of the young men go to work. Once accepted for contracts, they’re not heard from again. In a literal perfect storm, these things collide, leaving the natives scrambling to figure out what to do. The double entendre of the title will not be lost on the astute reader.

Mishy, a forty-something soldier, deserted because she could no longer tolerate the daily grind of fighting in a war. She has been living in an undersea city for the past twenty years. To her dismay, the war is still ongoing when she returns to land. The story here is about how that affects her and the choices she makes, both for herself, and for her newfound friends. Despite its cast of strong female characters, this tale borders on being just another story about the knowledgeable outsider who comes to the aid of the natives.

Kamaria is a were-helicopter gunship who, in the way of these things, shapechanges during the full metal moon. In the format of a script for a film crew, we learn of her life with her husband who is obsessed with folding things—paper, money, laundry, and so forth—, her pregnancy, and the rockets she will not fire when she is in helicopter mode. Rather than a satire on werewolves, this short, easy read is a ghost story about transcendence.