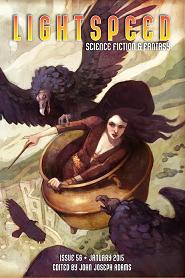 A young man begins a strange relationship with an alien in Bonnie Jo Stufflebeam‘s “He Came From a Place of Openness and Truth.” After working with Mickey, a boy from his high school, at a haunted house, the main character finds himself attracted, and they quickly enter into a sexual relationship. Aside from figuring out his sexuality, the main character also has to figure out Mickey, who stays aloof and distant. For a purpose, it turns out, when the main character stumbles into Mickey’s house and discovers an entire colony of clones Micky has made of him, clones destined to be shipped to an alien world for manual labor. Through it all, though, the story is about the relationship between Mickey and the main character. And it’s one that I just couldn’t quite get into as much as I needed to in order to really like the story. There are some tricky questions of consent and age and coercion that weren’t really answered enough for me to be comfortable with the love-will-conquer-all ending. The writing is charming, and certainly doesn’t shy away from showing Mickey and the main character’s relationship, but this one left me squinting more than smiling.

Mara, a young activist and college student, comes face-to-face with a bio-engineered weapon to make everyone on the planet anti-social in “Men of Unborrowed Vision” by Jeremiah Tolbert. Along with Adam, a wealthy friend, Mara races home after her ex, a fellow activist, is arrested for killing his roommate. Things don’t quite add up until she discovers footage of a strange drone hovering over a protest her ex attended, a drone he believed infected the crowd with something. Which turns out to be exactly the case as the story is broken at times to deliver a message from the men responsible for the attack, who have devastated the world in order to end collectivism in order to further individual achievement. It’s an interesting idea, but not really one that I fully understood. The terrorists here are capitalists trying to kill collectivity, and yet their businesses would depend on collectivity. Their everything would depend on collectivity. I just couldn’t buy that they would have wanted to do what they did, that they would be that crazy (and stupid). The never-say-die mentality of the ending, though, was refreshing, an affirmation of humanity’s ability to come together and not fall apart.

Matthew Hughes presents another chapter in the ongoing Kaslo Chronicles, where magic has replaced rationality as the driving force of the universe, with “Archon.” Kaslo and Obron, with their trusty new dragon, have made it to Old Earth to find that not all the technology there has been destroyed. They also find Filidor, the Archon of Old Earth, another magic user they hope will aid them in their quest. Negotiations are paused, however, as a demon, sent by their adversary, arrives and targets their dragon. Luckily, the Archon has some potent weapons and the demon is dispersed, sealing the alliance between Obron and Filidor. While this continues to be an interesting and entertaining series, this chapter felt a little slow to me, more concerned with moving pieces to where they need to be rather than having them do an awful lot. There’s a lot of talking and even the threat of the demon is neutralized without any difficulty. Kaslo himself, aside from being a bit more confident in his abilities, does very little. So a necessary bit of story, but not exactly the most compelling.

Kappa, strange creatures out of Japanese folklore, are exploited for the delicious and addictive water that pours from their heads while the woman responsible for their plight dreams of having done things differently in Sequoia Nagamatsu‘s “Headwater LLC.” Yoko, who as a girl befriended a Kappa named Masa, knows that she made mistakes that led to the enslavement of all Kappa, to be used for their magical headwater. Desperate for human friends, she told others the secrets Masa had confided in her and quickly found the entire situation beyond her control. Powerless to save the Kappa, or even just Masa, who still lives in captive service, Yoko dreams of being able to do something, anything. But fear holds her prisoner just as strongly as the chains that bind the Kappa, and in the end she does nothing, responsible for what happens because of her refusal to try to do anything. A stark look at how the best of intentions are often not enough, the story builds the relationship between Yoko and Masa slowly, bringing the reader further into the tragedy of their situation. Evocative and heavy, the story does an admirable job of making its points and letting them linger.