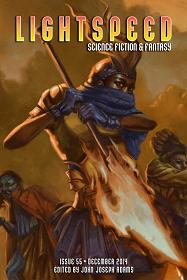 “A Lie You Give, and Thus I Take” by Damien Angelica Walters
“The Drawstring Detective” by Nik Houser
“Pay Phobetor” by Shale Nelson
“Wake-Rider” by Vandana Singh

Written in a metaphor-filled style that interweaves elements from Grimm Brothers’ fairy tales, Damien Angelica Walters’ “A Lie You Give, and Thus I Take” is an urban fantasy allegory about romantic relationships. The characters here engage in a dance of sweet (literally) affection that sometimes takes a darker turn. The story evokes visions of standing in a room with mirrored walls and trying to decide what is real and which are only reflected images.

The technology in Shale Nelson’s “Pay Phobetor” is more advanced than anything we have today. Rather than using an external device, think-apps can now be directly uploaded into our brains courtesy of implants. However, when the unexpected happens with the main character’s new MindPlant, we are reminded that the more things change, the more they stay the same.

Lelia, the protagonist of Vandana Singh’s “Wake-Rider,” is a scavenger who covertly rides the wake of the ubiquitous Euphoria Corprocacy’s larger space-faring ships and scavenges supplies at those ships’ destinations. This is in a time when Euphoria uses an incurable nanoplague to render populations subservient; worlds that rebel are “cleansed.” The challenges Lelia faces on her first solo mission force her to go beyond her training and make decisions with repercussions that even contemporary humans can appreciate. Recommended.