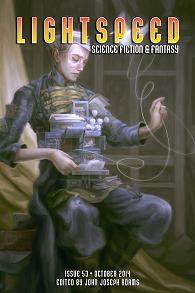 The unnamed narrator of Steve Hockensmith’s “Herd” is a cowhand who, after a freak storm during a cattle drive, finds himself in a strange place where the booze and broads are free. He comes to this place in search of his trail boss, Riggs, who went to the town for information and never returned. Once there, the narrator not only does not find the trail boss, he also finds himself unable to leave. He tries to escape despite warnings from the town’s docile residents, who explain to him that there is no leaving, and that yes, people and food do just magically appear and disappear on a regular basis. To say more would be to give away too much of the story. Let’s just say that the title here is quite apropos.

“Dust,” by Daniel José Older, concerns Jax who sometimes wakes up a man, other times a woman. Jax is in charge of an asteroid that is on a collision course with Earth. However, Jax develops a special relationship with the asteroid that appears to be sentient if not sapient. The ‘stroid is of interest to those who want to own and weaponize it, as well as some parties who want to destroy it, and Jax—the former because of the imminent threat to Earth, the latter because s/he is considered a freak. Twists throughout this tale can keep one guessing as to who is taking which position. The subtext regarding the various relationships is well done and nothing is gratuitous.

Marie Vibbert’s “Jupiter Wrestlerama” is a speculative whodunit which begins, as such stories are wont to do, with a death—that of Two-Ton Tony, a hard-bodied wrestler on a space station orbiting Jupiter. After the station police classify it as an accidental death even though there is a knife sticking out of Tony’s chest, his girlfriend, Karen, investigates. She is sure Tony was murdered and determined to find out why and by whom. In an enclosed space with a consistent population, there can only be a limited number of suspects. In this instance, that dearth and Karen’s straightforward investigation—she guesses the culprit’s identity from the beginning, and spends most of the tale confirming her theory—makes the story less exciting than it could have been.

Ava, a woman with wings, is the main attraction in “The Quality of Descent” by Megan Kurashige. She rides into town on a bicycle one day and changes the narrator’s life. He specializes in procuring living creatures for events and entertainment. His relationship with Ava, however, becomes romantic—at least until he finds her a position as a magician’s assistant. That decision instigates events that change the narrator’s world even more than Ava coming into it. This is a story about life, love, and the difference a pair of wings can make.