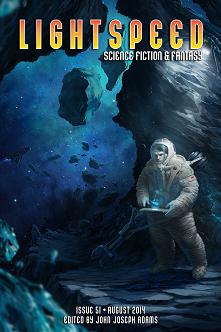 “Undermarket Data” by An Owomoyela
“A Box, A Pocket, A Spaceman” by E. Catherine Tobler
“A Meaningful Exchange” by Kat Howard
“The Djinn Who Sought To Kill the Sun” by Tahmeed Shafiq

In “Undermarket Data,” by An Owomoyela, Culin is a gimp-legged electrical repair technician and a “contage” (having some sort of contagion) living in the undermarket—the “have-nots” part of a society in which everything favors the upcity “haves.” His workplace is the vertical avenues of the city; he climbs buildings to access the network of physical cables and nodes through which runs the data that keeps the city secure and organized.

The story is less about the job-related problem Culin has to solve—the lines have all been clogged with encrypted data, endangering access to vital information—and more about a relationship that forms between Culin and Jace, an upcity cop who is trying to find the answer to the same problem. Simple things like where one is allowed to sit in a bar or receiving a spontaneous kiss from a stranger have hugely different ramifications if one is from the wrong side of the class divide. But as Culin and Jace find tentative peace with each other, we see that there’s balance in the way things are, and within that balance are sown the seeds of friendship.

The themes here—a futuristic society with an extreme division of classes, the infiltration of an Internet regulating all aspects of our lives—are not new. I was reminded of half a dozen other stories as I read through this one. As stated, though, this is more a story about the development of a relationship than about the action within a particular setting. And that part of the story is what I found enjoyable. Culin and Jace are both interesting and likable, their chemistry layered and realistic. The events that bring them together aren’t suspenseful or particularly dramatic, but through them we see these two characters developed with enough depth that I would happily have read an entire novel to know them more. If I were to compare this story to a drink, I’d say it’s mellow-flavored on the edge of being bland, but with some interesting fruity notes and a subtly sweet aftertaste that warms the palate.

“A Box, a Pocket, a Spaceman,” by E. Catherine Tobler, is a surreal stream-of-consciousness story of a spaceman who visits a teenaged girl who’s lying in a hammock on a hot summer afternoon. The spaceman yanks her out of the hammock right before it’s vaporized by some unseen tentacled creatures. Dreamlike tangents continue as the spaceman shows the girl his pocket, which is filled with space and stars, but during another visit he’s bleeding, and his pocket only contains his own possibly dying flesh. The tentacled aliens find them, and then they dissolve, or maybe just the scene or the memory or the thought dissolves. Scenes shift, time is random, and metaphors are literal. Images are beautiful, but the tone is slightly sad—a dream of loss, even though I can’t say anything about what was lost.

My summary is a bit confusing, because it’s like trying to summarize a dream. I get the sense that what happens in the story isn’t so relevant—that what is important are certain images, patterns, or archetypes seeded into the reader’s consciousness. I feel that this sort of story, an intricate and wild cousin to a poem, is best enjoyed if one just lets the prose flow without trying to order it, leaving those feelings and images lingering behind—to perhaps germinate into something else in alchemy with one’s daily existence, or perhaps to remain dormant. Honestly, I really liked it—it felt like one of those stories that calls on the reader to be active and open to the periphery. I wouldn’t want to read stories like this all the time, as I’m far too lazy and linear, but this one was a pleasant diversion.

In “A Meaningful Exchange,” by Kat Howard, we are introduced to Quentin, whose one great magical talent is lying. He gives lies to people that they can use; the magic of these lies is that they are guaranteed to be believed when used. He takes, in exchange, a payment that balances out what the client gains from the lie.

Quentin meets a beautiful woman named Thea in a coffee shop; she wants to know how to get a man to tell her he loves her—but in specific circumstances she won’t explain. When he tells her that his talent doesn’t cover what she’s asking, she leaves, but in following days she keeps returning. Quentin finds that he enjoys her company—and something about her elicits truthful conversation from him, a novelty in itself. Little does he know that their very interaction is a transaction in which truth and lie, give and take, are being re-balanced.

The concept of this story is fascinating, the themes intricate and food for many hours of thought. I have to admit, though, that I really didn’t like either Quentin or Thea—the former because he’s too naïve and not someone with whom any reader would want to identify, and the latter because she remains shrouded in mystery the entire time and we never get to know what motivates her beyond selfish compulsion. That, combined with a poetically appropriate but real-life unjust ending, detracted from my enjoyment of the read.

“The Djinn Who Sought To Kill The Sun” by Tahmeed Shafiq is a story that follows the djinn’s tale post-Aladdin. The djinn is on a journey accompanied by Aladdin’s young son, the prince. Early on we learn that the djinn doesn’t feel very charitably about having been a slave to Aladdin all these years. We also learn that he has some other past traumas and that he’s obsessed with a long-lost love.

In a cave far below the earth, the djinn seeks and finds an Ifreet—a legendary winged being who tells him how to “kill the sun”—an act that the djinn believes will bring his lost love back to life. The Ifreet’s advice leads him to a confrontation that turns out to be more than just a battle with a creature from without; the djinn finds he has to face his own internal pain and the uncomfortable truths that have caused it.

The story has an authentic feel of a folk tale, complete with the same sort of dispassionate amorality typical of such tales. The djinn, although it’s interesting to see him “humanized” here instead of just being an all-powerful tool to grant one’s every wish, isn’t a sympathetic character. Since he’s centuries old, I would hope he would have a wisdom to correspond with his extreme magical power, but instead he remains as cluelessly obsessed with his past mistakes and his dead wife as a much younger man. Still, the story offers an interesting and creative twist on the Aladdin tale and the end is a redeeming one.