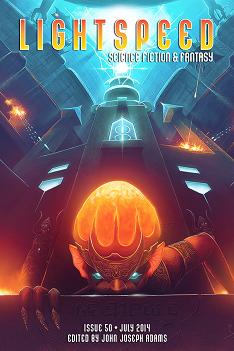 “The New Provisions” by Adam-Troy Castro
“Harry and Marlowe Versus The Haunted Locomotive of the Rockies” by Carrie Vaughn
“A Hole in the World: A Kaslo Chronicles Story” by Matthew Hughes
“Cimmeria: From the Journal of Imaginary Anthropology” by Theodora Goss

“The New Provisions” by Adam-Troy Castro presents a Kafkaesque scenario with which anyone who has ever disputed a cable or cell phone bill will empathize. Phil’s troubles begin when he complains about a company on their website and end when he is “disappeared” like those who spoke out against the Irish Republican Army. “The New Provisions” is, therefore, a story with a moral and a message, but the message doesn’t tell us anything we don’t already know. Kafka’s tales of bureaucratic nastiness depict one’s place in an ultimately unfeeling universe. More recently, in the absurdist tale “The Censors” by Luisa Valenzuela, a man becomes a censor in order to find an incriminating letter he’s written, but by the time he finds his letter, he’s become so good at his job that he censors it and then turns himself in. That story depicts the way that oppressive governments corrupt us from the inside, but the point of Castro’s story is that complaining about people in power doesn’t always work that well because, well, they have more power than we do. This isn’t to say there aren’t weighty philosophical issues to be explored regarding business and power. Americans believe we are the capitalist land of the free, but to what extent do these notions go together? That is an issue I would like explored. I already know that complaining about my cell phone contract could, in a different world, wind up with me in a mob trunk.

“Harry and Marlowe Versus The Haunted Locomotive of the Rockies” by Carrie Vaughn stars the granddaughter of Queen Victoria, also known as Princess Maud of Wales, though she prefers to be called “Harry Mills,” together with Lieutenant James Marlowe, her Jeeves. They are on a tour of America in their airship when they hear about a train with a mind of its own and the bounty hunters challenged to bring her under control, but who never come back. Although Harry doesn’t need the reward, she and Marlowe show up to investigate and solve the mystery. They suspect the mystery has something to do with Aetherian technology. This alien technology forms the core of Vaughn’s series of steampunk stories about an alternate Victorian. All of them are in the tradition of 19th-century adventure stories and they’re told with the same gusto. Vaughn captures the lightness and breathlessness of the genre, where the point is purely to entertain and keep the reader hungry for the next adventure in the serial. I recommend the entire series for fans of nineteenth-century adventures as well as contemporary episodic adventures like Doctor Who. All of Harry’s adventures can be found on the Lightspeed website, www.lightspeedmagazine.com.

“A Hole in the World: A Kaslo Chronicles Story” by Matthew Hughes is also a work in a series readers can find on the website. The series stars Erm Kaslo, operative in the service of Diomedo Obron, who used to seem like a crank. Obron predicted a coming age of magic that destroys what Hughes calls rationalism. Rationalism appears to include most technology as well as basic laws of physics. In this episode, Kaslo and an associate investigate what’s laid waste to a nearby village in a setting of cultural collapse. The repercussions of not having access to ambulances and, one supposes, antibiotics, is touched on, though otherwise the oddities of the magical/rational split are not explored. In the end, Kaslo solves the mystery and we’re ready for the next installment. The story is entertaining enough, but the conceit deserves more attention since it isn’t as easy as introducing an alien technology. Hughes proposes a radical shift and it is never clear exactly how this plays out, which gets in the way of a smooth read. One keeps asking, In what sense is this “rationalism?” What did Hughes mean by that anyway? It’s therefore more satisfying to read the fun stories together, rather than individually. Hughes does promise he’ll eventually publish a collection.

I expected “Cimmeria: From the Journal of Imaginary Anthropology” by Theodora Goss to be about the Cimmeria of my youth, which was, of course, the homeland of Conan the Barbarian. This is not that Cimmeria, as the country is made up, though the authors are members of an Arizona anthropology department. They invent a history, a language, and a people so realistic they come to life, but one of the postdocs, Patrick Nolan, should have shown more care creating the metaphysics. His sloppiness regarding what constitutes a soul has repercussions for identical twins, for if it is one soul to one egg, then twins are not two people, but one. Among the many surefooted moments in the story is that the academics invent an entire country that comes to life, but are principally concerned with the journal articles they can get out of it. This is funny and just the way one imagines it would be. As expected, there are grand pronouncements about reality, culture, and identity (as well as a tip of the hat to Borges), but what keeps those pronouncements from being tiring is that they are put in the mouths of those academics, who always say such things. The people of Cimmeria, including the twins at the center of the story, are concerned with mundane matters of education and politics and the civilization is basically a nicer version of a Middle Eastern country. One of the key differences between Cimmeria and us is that genders are roughly equal, which is where the Cimmeria of my youth becomes relevant. For all the kerfluffle regarding the recent Lightspeed issue focused on women in science fiction, it’s interesting to consider the possibility that in a new age, stories won’t ask readers to have to overlook some key features of the Conan series to enjoy a piece of speculative fiction.