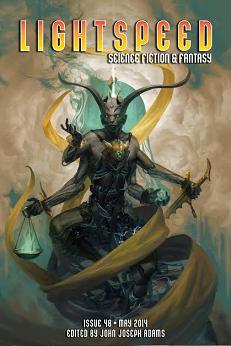 A young elf flees a death sentence at home to a different sort of death sentence in a twisted, steam-and-sorcery-tinged New York in Fred Van Lente‘s fantasy “Willful Weapon.” To Cellach mac Rath, New York is a fresh start, is freedom, and yet when he arrives he finds an oppressive mix of racism and social injustice waiting for him, and he quickly learns that in his new city it’s kill or be killed, become a member of the feared gang the Willful Weapons, or become a corpse. It’s a life he accepts, at first grudgingly but with growing eagerness, until he receives a geis, a prophecy of his own mortality. Faced with the prospect of death, Cellach tries to flee, tries to take control, only to find everything circling back around, escalating with each crime he commits, each life he takes. The setting, a mix of early industrial America and fairy tales, is dirty and corrupt and original, but might not be for everyone with its abundance of violence and whores. And despite some interesting twists in the story, I felt the ending and its message were a little rushed, a little unfinished, and ultimately that kept me from fully enjoying Cellach’s tale.

The line between woman and machine is blurred in “Selfie,” a time travel science fiction story by Sandra McDonald. Susan, tired of taking vacations back in time with her father, opts to send a Selfie, a robotic replacement that contains her personality, whose memories can be re-uploaded later, in her stead. When her “real” self suffers an accident, though, and is put into a coma, Susan’s father tries to cope by continuing to take summer vacations with the Selfie. Unable to retain memories year to year and unaware of the accident, the Selfie starts to suspect something is wrong, and finally pieces everything together, confronting her father about what he’s doing. At turns fun and tragic, the story paints a touching picture of Susan’s relationship with her father, and explores the role of the Selfie once Susan is incapacitated. And, ending on more of a question than anything, it left me wondering after answers long after I finished reading.

Matthew Hughes continues the trials and adventures of Kaslo and his master Obron in the post-apocalyptic, sword and sorcery fantasy “The Ba of Phalloon.” Having taken Phalloon’s castle, Kaslo sets about trying to organize the survivors of the great catastrophe into something like a village while Obron continues in his studies of thaumaturgery, the world’s magic. Even as he attempts to bring structure and order to the broken land, though, Kaslo begins to suspect that there is another force at work in the world, one darker and more powerful than Phalloon. Desperate for information, Obron sends Kaslo into the Underworld itself to question their fallen foe. When Kaslo returns it is with new clues, but it is also to discover that most of the villagers have been abducted by new and strange creatures. An installment in a much larger series, the story flowed easily enough, and I never felt wholly lost despite not having read the other parts. Still, it was less than satisfying to be given only one part of the story, and not the beginning or end, and I’m not sure what I read piqued my interest enough to pursue the other parts.

In Seth Dickinson‘s “A Tank Only Fears Four Things,” a military, alternate-history science fiction, a veteran yearns to overcome her fear, and in doing so briefly becomes a tank. Tereshkova, a woman who served in war as a driver, finds the return to civilian life paralyzing. And when her love and fellow-veteran Yorkina asks for her help, Tereshkova opts for experimental surgery to overcome her own fear so that she can help Yorkina deal with hers. The experiment, though, changes her into a tank, not literally but mentally, curing her of her trauma and allowing her to give what she thinks Yorkina needs. When she discovers that fear was not what was keeping them apart, though, but what might have brought them closer, to a place they both wanted and needed, Tereshkova must decide whether life as a tank can replace the intimacies of humanity. Told concisely and respectfully, the story deals with some very serious subject matter in a way that is emotional, creative, and with an ending that hits like a missile, precise and powerful.

Charles Payseur lives with his partner and their growing herd of cats in the icy reaches of Wisconsin, where companionship, books, and craft beer get him through the long winters. His fiction has appeared at Perihelion Science Fiction, Every Day Fiction, and is forthcoming from Wily Writers Audible Fiction and Dragon’s Roost Press.