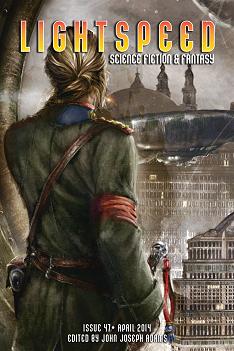 “Observations About Eggs” by Carmen Maria Machado
“Codename: Delphi” by Linda Nagata
“Complex God” by Scott Sigler
“Francisca Montoya’s Almanac of Things That Can Kill You” by Shaenon K. Garrity
“The Day the World Turned Upside Down” by Thomas Olde Heuvelt

Told as a series of strange comments about eggs a woman hears on a flight, Carmen Maria Machado‘s “Observations About Eggs” defies being classified as any traditional genre. Divided into fifteen small sections that vary in length, the story, such as it is, is more a collection of thoughts, ideas, musings, and theories. And because of the unusual structure, some of the observations are interesting, or funny, or kind of creepy, but others tended to fall a little flat. Much like a platter of egg dishes, some were appealing and delightful and some were just strange and opaque. And while fun in places, it’s hard to say if the story poached as well as it could have.

Linda Nagata crafts a tight near-future military science fiction story in “Codename: Delphi.” Delphi, a woman in charge of assisting and analyzing real-time military actions, must stay alert and focused as she jumps between first three, then four different teams of soldiers, all engaged in different and dangerous missions. Testing the limits of her mental abilities and endurance, Delphi contemplates her role in the military and if she can continue when the stress and workload has her drained and fraying. The action is fast and constant, placing the reader in the frantic situation Delphi lives in and delivering a satisfying and complex story that left me almost gasping for air.

In “Complex God,” Scott Sigler tells a sort of mad scientist story starring Dr. Petra Prawatt, the creator of a type of small cyborg that cleans radioactive contamination. Full of a brash confidence and the best of intentions, Petra shows off her progress to the governor of Michigan in a Detroit that has been destroyed by a nuclear bomb. And while her creations seem to be working perfectly at first blush, as Petra moves closer to ground zero there are signs that something has gone very wrong, or perhaps very right. The story is part science fiction, part horror, part something else entirely, and by the end there is the feeling that things are going to change, but whether for good or bad remains left up in the air. What is more certain is that the story is compelling and filled with interesting ideas. Petra makes a great protagonist, flawed by her intelligence and ambition, and yet still very sympathetic, very human even as she becomes something of a god.

“Francisca Montoya’s Almanac of Things That Can Kill You” is another story told as a sort of list, but Shaenon K. Garrity uses the almanac style to weave a post-apocalyptic story of an aging doctor moving through the mountains, trying to stave off hypothermia and other maladies. The entries tell of a world suffering from the White Plague, a world that Francisca had successfully navigated for many years as a doctor. Pushed to take an ill-advised trip through the mountains in winter, though, in the hopes of curing the plague, the entries slowly reveal the misfortunes that fell on her and her companion on the way. It is a stark tale, dark but with a certain wit and sarcasm, and does a good job of building up the world and the story slowly from entry to entry. It is not a happy tale, but it is a well crafted one, cleverly told, and I enjoyed reading it.

Everything gets flipped in Thomas Olde Heuvelt‘s “The Day the World Turned Upside Down,” a weird story that follows Toby, a recently dumped man, after he survives the world’s gravity suddenly inverting. Teaming up with a young girl, hand gliding through the endless sky, having tea with old ladies, the story follows Toby on his quest to reunite with Sophie, the woman who dumped him. The writing is strange and haunting at times, and the story does a decent job of showing Toby’s pain, his anguish at having lost the love of his life, but I felt that he was too selfish a character, too full of himself to completely enjoy reading about his journey. As an extended metaphor the story works, with Toby’s physical world mirroring his mental world that is turned upside down by his breakup, but the story itself dragged on a bit in places. While definitely an interesting concept, I just never felt that invested in the outcome, so the whole thing landed a bit weak for me.

Charles Payseur lives with his partner and their growing herd of cats in the icy reaches of Wisconsin, where companionship, books, and craft beer gets him through the long winters. His fiction has appeared in Perihelion Science Fiction and is forthcoming from Wily Writers and Dragon’s Roost Press.