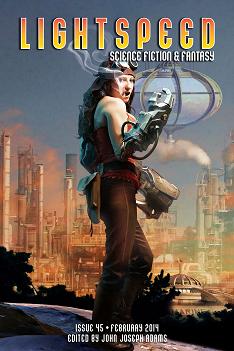 “Coma Kings” by Jessica Barber is a wrenching story of loss. Jennifer’s sister has hardwired herself into an immersive video game, and her body is slowly dying. As time goes by, and Annie refuses all of her game requests and ignores all of her messages, Jennifer feels herself caring less and less about the real world, but she’s not quite able to let go. When she and Annie do play again, things don’t end up the way Jennifer had hoped.

In “So Sharp That Blood Must Flow,” Sunny Moraine reimagines the ending of “The Little Mermaid.” The mermaid doesn’t turn to foam—instead she sinks down to the bottom of the ocean and makes another deal with the sea witch. After she’s granted new life, she swims back to the surface to seek her revenge. The writing is evocative and beautiful, and the story itself is chilling.

“Harry and Marlowe and the Intrigues at the Aetherian Exhibition” by Carrie Vaughn is a fun romp. Harry is a princess, granddaughter to Queen Victoria, and she’s fascinated by alien technology that crashed into England on the day of her birth. She attends an exhibition of alien-inspired technology with her family, and her brother requests her help in looking for German spies.

Kino is a young engineer, chosen to help create Xana’s air force to improve their position in the Seven States of Dara. Ken Liu tells his story in “None Owns the Air.” Kino travels to the Temple of Kiji with his sister to study the sacred falcons and the secrets of their flight. He kills one of the sacred birds to study, and his pious sister aids him instead of reporting his blasphemy. When she is punished and he is rewarded, he’s left to try to navigate the political currents as best he can. The setting and descriptions are vivid, and the characters are interesting.