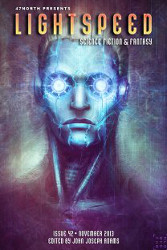 “Death and the Hobbyist” by Sean Williams
“The Turing Test” by Beth Revis
“The Insect and the Astronomer: A Love Story” by Kelly Barnhill
“Sleeper” by Matthew Hughes

Sean Williams‘ “Death and the Hobbyist” is a poignant and well-told tale about a woman in a technologically advanced world dealing with her “crazy” mother who thinks fabricators (fabbers) give you cancer and matter transmitters (d-mats) age you prematurely. Eventually, the Luddite forbids her family from using the d-mat, which allows her daughter to travel instantly from Africa to North America to visit her mother. Instead, Juliet says she will visit them. But in a world that no longer has freeways or airlines, it’s a nearly impossible task. In time, the old woman is shipped off to an assisted care community, but hope is found in a hobbyist, a man who rebuilds old machines. In the end, Juliet teaches her daughter that it’s about the journey, not the destination. “Death & the Hobbyist” takes place in Williams’ Twinmaker universe.

In “The Turing Test” by Beth Revis, 18-year-old college freshman Elektra Shepherd participates in a Turing test. Her task is to converse with two subjects, Red and Blue, and determine which one is the AI. The story is clearly derivative of Philip K. Dick’s Do Androids Dream of Electric Sheep? (the doctors administering the test are named Richard K. Phillip and Andrew Deckard), and as such you don’t need to be a precog to foresee the twist ending.

“Sleeper” is the second episode in Matthew Hughes‘ Kaslo Chronicles. The first, the novelette “And Then Some,” appeared in Asimov’s Science Fiction last year but was reprinted in Lightspeed in September. In “Sleeper,” we find confidential operative Erm Kaslo returning to his home planet after an assignment. He only wants to play in the space liner’s casino and catch up on his reading, but after the captain picks up a “sleeper” in deep space, Kaslo finds himself with another job. The world-building slows down the plot, with much of the story devoted to explaining things like integrators and sleepers (which are small containers “scarcely larger than its occupant” that allow people to travel through space cheaply). This is most likely the consequence of writing such a short (3600 words) story set in such a big world. Two more episodes are set to appear in Lightspeed.