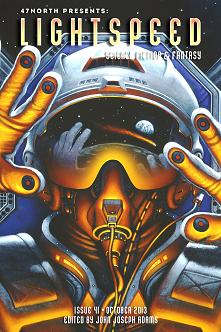 Ona can seem like a typical adolescent—sometimes obedient, sometimes a loudmouth. She struggles with math, and doesn’t understand the value of history class. These are the important aspects of Ona. The fact that she is a lizard-like alien/human hybrid is secondary. What matters, and in this story everything matters, is that the importance of the past is lost on her. Why is she studying about a race she is only partially connected to, and places she will probably never see? What is the significance of the trinket her teacher has asked her to present?

These questions are answered as the story takes the reader back from Ona’s planet, Nova Pacifica in the year 2313, to Connecticut in 1989, and Hong Kong in 1905. The characters in these other settings ask themselves similar questions about the past and their place in their own present. Questions about race and verisimilitude result in answers that help fulfill the meaning of the plot. “Ghost Days” is not about the plot, the plot is the vehicle for the meaning. Every action and every word spoken drives the meaning. And what is the meaning? Suffice it to say it’s worth reading this one to find out.

Peter successfully cast a spell. No side effects or anything. It was a clean spell and he became the talk of the town. Everyone from local media to CNN wanted his story. Rumor was that he was a descendant of a famous wizard. Why this was the case is unknown, because nobody actually knew what spell he cast. And in that case, how could they know he did it without any consequences? The story never bothers to explain any of this, nor why we should care about Peter. Sure, there’s the big reveal at the end that’s supposed to make him seem like a sweet guy, but who wants to read 90 percent of a story before they have a reason to read any of it? Also, having an omniscient narrator narrate like a teenager is just distracting.

Kickstarter has become a popular method for getting all sorts of projects off the ground through crowd-funding. If it can resurrect the point-and-click adventure video game genre, why not a robot army bent on world domination? If only this were a story and not just a goofy Kickstarter spoof, there may be something worthwhile to the concept. As it is, it’s a somewhat juvenile attempt at humour.

“The Five Deaths of Marvin Dimitri” by Dylan Otto Krider

A picture may be worth a thousand words, but sometimes a few words can be priceless. For Marvin Dimitri, he is as good as his word, even when his words break all natural laws. When he told his wife he’d be back from the war, he kept his promise despite stepping on a landmine. And that was just the first time he died. If a person’s word is their bond, Marvin Dimitri is the most reliable person on the planet. It’s a short and sweet tale, with just a syrupy enough ending.