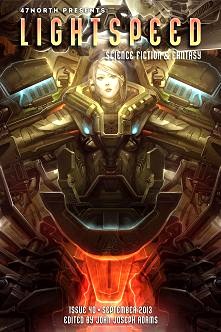 “The Schrödinger War” by D. Thomas Minton
“Bellweather” by Marc Laidlaw
“Dry Bite” by Will McIntosh
“Homecoming” by Seanan McGuire

Although “The Schrödinger War” by D. Thomas Minton begins with a short, mediocre opening paragraph, it quickly moves into the meat of the story as told by a volunteer soldier fighting a large alien force called the Eatees. The poignant descriptions and robust, hard SF elements grab and hold the reader’s attention as we learn more about and gain sympathy for our narrator. This story is about withstanding hellish odds in the hope of seizing upon any opportunity to improve upon life, however incrementally.

“Bellweather” by Marc Laidlaw depends on a 4th wall introduction that sets the story up for failure, then spends too much time in an irrelevant opening scene. We follow Gorlen and Spar, human and Golem respectively, who share a curse for which they seek to find a cure, but instead end up saved from death by Chasmin, whom they then feel obligated to help extract his son from a kidnapping. While this narrative seems meant to shed light on the true nature of Gorlen and Spar’s journey and curse, the author spent far more effort describing his sound-based magic system and magic battles than developing a solid, tight plot.

“Dry Bite” by Will McIntosh is an engaging character journey set in a post-apocalyptic world where stingers – former humans who have morphed into dangerous creatures – have decimated Earth’s population. When the stingers suddenly stop attacking Josephine and the others in her compound, our protagonist takes the opportunity to explore the many unanswered questions left by the stingers’ initial invasion, much to the worry of her friend Bella. McIntosh artfully intersperses flashbacks and back story to provide the reader with a fleshed out tale driven by both action and emotion. Unfortunately, due in part to a title that undermines the turning point at the end, “Dry Bite” reads more like a first chapter of longer work.

“Homecoming” by Seanan McGuire is set in a never-ending football game that clearly has a paranormal explanation. The SF/F elements are annoyingly suppressed in a failed attempt to keep the nature of the game a surprise until the end. McGuire gives readers little to hold onto in terms of character development, mystery, or SF/F elements.