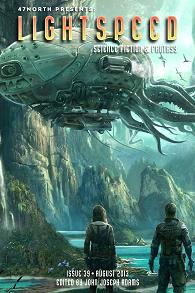 “The Litigation Master and the Monkey King” by Ken Liu
“Breathless in the Deep” by Cory Skerry
“The Knight of Chains, the Deuce of Stars” by Yoon Ha Lee
“Face Value” by Sean Williams

“The Litigation Master and the Monkey King,” by Ken Liu, is based upon a combination of old Chinese folktales and accounts of 17th century Manchu atrocities. There is also a certain lyrical quality to the picturesque serenity painted by the story’s beginning.

As a litigation master, Tian Haoli helps the locals sort through the mysteries of the Great Qing Code as enforced by the Emperor’s yamen courts. The rest of the time he enjoys his virtual feasts with the immortal Monkey King and a poor, but quiet life. When a neighbor woman comes to him for assistance, he easily gets her off by a clever manipulation of the contract wording, embarrassing her rich cousin who’d tried to defraud her out of her farm. But the same woman comes back to him later with a more serious problem—her brother is wanted by the imperial Blood Drops, the Emperor’s eyes and talons. Her brother, who is hiding in her house, possesses a banned book that details the Manchu atrocities of the 1645 Yangzhou Massacre. And he wants Tian to see to the book’s safety. Tian loves his life but is no hero. The Monkey King, however, reminds Tian that there are no heroes, just normal people facing extraordinary choices, and Tian faces just such a choice now. His life will never be the same.

The author continues to write excellent stories that blend Chinese history and folklore with intriguing spec-fiction settings. As always, a pleasure to read and highly recommended.

In Cory Skerry’s “Breathless in the Deep” Jantz dreams of freedom, having been an indentured servant since bought as an orphan child. All she needs is one last, big-haul pearl dive. Except her master takes her to a strange place where they have never dived before and the black skeleton of an ancient ship pokes above the waves. Her kraken ink tattoo guarantees she can breathe underwater and stay as long as she needs to harvest fist-sized gems from man-sized clams. She’s cautious, careful not to let the clams trap her or a large resident kraken eat her. Until she stumbles upon the true danger that rests beneath from those her master had brought here before. An enticing read from start to finish.

“The Knight of Chains, the Deuce of Stars,” by Yoon Ha Lee, is a truly cerebral tale that describes a contest of language and symbolism between Niristez, a master tactician striving to win an unwinnable war, and Daechoing, a captive immortal who would like nothing more than his freedom. Except in this game there can be two winners: Niristez, because she “thinks of something as far-reaching and devastating as war to be nothing more than a game,” and Daechoing? . . . well, spoilers. Reading this story is a labor of love, just like the game of goseki, and requires both an open mind and a focused soul, otherwise it will drown you. Definitely recommended.

Sean Williams’ “Face Value” is a light-hearted and deliciously twisty police mystery. In this reality, everything (except certain illegal substances) can be fabbed and duplicated without limit, leaving the world without want, and novelty. Obscure inventor, Felix Frey, has announced to the world that he has a breakthrough that will overturn society, then abruptly disappears. Peacekeeper Sargent’s boss tells him that he had arrested Frey, then drops a bombshell—he needs Sargent’s help determining what Frey had actually done that was wrong. Together they interview Frey who reveals that he’d created a new element, something that could not be duplicated by a fabber and, therefore, by definition, would have value as a scarce item. Except Sargent thinks Frey’s efforts are all pointless, and, in fact, a scam, because Frey is after something even more ephemeral.

The ideas of this story appealed to me, but something about its conclusion left me wanting. Frey’s crimes seemed a bit too amorphous for me and Sargent’s sense of outrage vastly underplayed. Yes, I understand that this isn’t meant to be a “hit-you-in-face” type of story. Still . . . I wanted more.