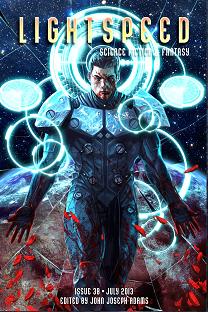 “The Boy and the Box” by Adam-Troy Castro
“The Villain You Must Create” by Carlie St. George
“Cancer” by Ryan North
“Division of Labor” by Benjamin Roy Lambert
“Ushakiran” by Laura Friis
“Golden Apple” by Sophis McDougall

The July issue of Lightspeed consists of six stories, and a combination of fantasy and science fiction tales. A couple are reprints from the recent 2013 science fiction anthology The Lowest Heaven, edited by Anne C. Perry and Jared Sharin.

Adam-Troy Castro‘s “The Boy and the Box” is definitely a weird one. The unnamed boy is in a desolate scene, holding the box where he has put the whole of humanity. He’s developed godlike powers and toys with those in the box, taking them out and putting them through some very warped games. It’s not a story for readers who expect an explanation, but creates a strange and dark mood.

We’re in superhero territory with “The Villain You Must Create,” where Granite kills Mr. Malevolence, his arch enemy. Granite finds out that life without an arch enemy is pretty empty for a superhero, and takes on the opportunity to work with Obsidian, a supervillain who is looking to replace her arch enemy. Carlie St. George‘s story starts out like a romance, but takes a dark turn that tries to say something about the nature of superheroes and their arch enemies. I’m afraid I found the ending unsatisfying.

I’m very perplexed by Ryan North‘s “Cancer,” one of the reprint stories. The setup is fascinating: people can take a blood test at birth to determine how they’ll die. Helen Lawrence, who was tested at birth, is supposed to die of cancer, and is upset when a later test indicates it will be suicide. Most of the story consists of Helen being tested to find more and more different causes of death. The explanation to the mystery is a good one, and the portrayal of Helen and her partner Tina is wonderful; they are great characters who I’d love to have seen more of. But the story stops dead and suddenly becomes the story of Henrietta Lacks (the woman whose cancer cells are still being used in research, decades after her death). My feeling is that if North wanted to honor Lacks, he should write a story about her, and not a story about someone else with a note saying “This is about Henrietta Lacks.” The time frame of the story is also jarring: this technology is portrayed as being available in 1990.

“Division of Labor” is another weird situation: in the future, people only keep the body parts they need, and slough the rest off to be used for other purposes –the ultimate “use it or lose it.” Renny becomes part of an underground group that believes bodies should remain whole. Benjamin Roy Lambert finds some interesting ramifications of the concepts, but I was disappointed by the ultimate result.

Laura Friis contributes the high fantasy “Ushakiran,” about a girl born aboard a fishing ship and who never sets foot ashore and becomes a good luck charm for the sailors. Her life is disrupted by the addition of Haf, a woman who clearly doesn’t like her very much and who had just enough knowledge of magic to be dangerous. It’s a darkly poetic and moody story, but the ending goes for a mix of tragedy and hope that really isn’t either.

“Golden Apple” is about the theft of the result of a new process, one that turns sunlight into a solid. The thieves are the parents of Daisy, a dying girl, and they believe (for some unexplained reason) that it will cure her. It does, but with frightening side effects. Sophie McDougall creates an interesting situation and follows it through, but the ending just leaves things hanging.

Reading through the stories, I find that the common thread is that they tiptoe around any emotional payoff or even partial resolution and flirt with futility. It’s not impossible to make this work, but these stories seem to avoid going anywhere just for the sake of avoiding a strong ending.