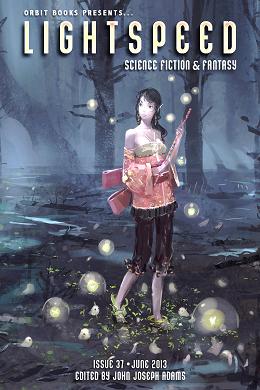 This issue of Lightspeed is a rather lightweight issue. Nothing of any great import, but it is nice to see some new authors represented.

Chistopher Barzak is one of our great fantasy writers. Here, in “Paranormal Romance” he gives us – in movie terms – a breezy rom-com. It involves a witch who makes her living making love spells but cannot find love for herself, her best friends – a loving gay couple downstairs, an overbearing mother and a bad date named Lyle (for a specific reason). It is light and fluffy and not too deep. It could easily star Jennifer Aniston or Sandra Bullock if made into that rom-com.

New writer, Sarah Grey, has a good idea in “The Ballad of Marisol Grey.” It’s not a new idea – the reconstruction of people after death by cloning – but by following the commercial aspects of that process through four deaths and successive reconstructions of a major world celebrity, she explores the culture of technological miracles. Taking her cue from micro-waves, calculators and computers she realizes that all “new” technologies go from expensive and elite to inexpensive and common. Unfortunately, she combines this with the trite (but true, I grant you) idea that happiness is self-acceptance rather than material wealth. This may not be excellent fiction but Sarah Grey shows great promise.

Megan Arkenberg is line by line a wonderful writer. The first paragraph of “The Huntsman” is eerie, and grounded at the same time.

“It’s the best bargain you’ll get in this town,” the faery woman says. She’s standing by a cracked kitchen sink with mold between the tiles, rinsing diced tomatoes and crooked green jalapeño rings. “A heart for a heart. And my heart’s more than what she’s used to, I’ll tell you that. You couldn’t find better if you went door-to-door from every house in the tithe-projects.”

This is an author who can write. This offering, however, is not my cup of tea. It’s an unusual retelling of the Snow White story. The un-named huntsman of the title is sent to rip out the heart of an un-named Snow White by a faery called Queenie. But all is a muddle with the dreams of faery and a murky atmosphere that confuses more than it should. It is a nightmare story that will never end for the huntsman.

“Alive, Alive Oh” by Sylvia Spruck Wrigley is about scientists based on an alien planet. Unfortunately, they can never return home since “a bacterium on the alien planet mutates into a killer on Earth.” Thus, a young mother is stuck with her scientist husband on a planet that is endemic to human life. She yearns for Earth and feeds her daughter with that same yearning. It’s a competent story but not quite the tragedy it seems to want to be. The outcome is too certain and unsurprising.

This issue is not Lightspeed’s best. But that is a very high bar indeed.